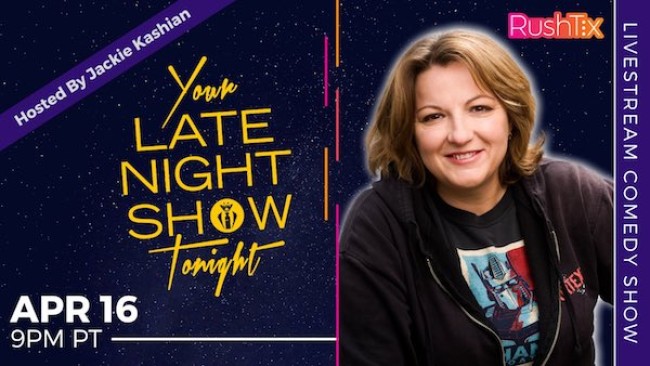 Every month you are treated to a new late night talk show hosted by a different comedian on YOUR LATE NIGHT SHOW TONIGHT. Friday, April 16th comedian/podcaster extraordinaire JACKIE KASHIAN (The Dork Forest, The Jackie and Laurie Show!) brings you her very own talk show from her own unique point of view. Jackie’s current album  I Am Not The Hero Of This Story received critical acclaim and was #1 comedy album on iTunes and Amazon. She is in her, wait for it, 13th year of the podcast The Dork Forest, where she talks to guests about their impassioned “dorkdoms.” Jackie also co-hosts the podcast The Jackie and Laurie Show with Laurie Kilmartin, where the two “complain and celebrate” standup comedy. Fun fact: Jackie is the proud owner of an adorable pooch named Gordy. Jackie’s guest for the evening will be none other than comedy great, Margaret Cho, actor, comic, producer, and host of The Margaret Cho podcast on Earios network. Your Late Night writers this month include Carmen Morales, Wynter Spears, Stacy Rumaker, Virginia Jones, and Chelsea Pope. Get your RushTix below and check out Jackie’s IG show plug for good measure:

A post shared by Your Late Night Show Tonight (@yourlatenight)