Quick Dish Online: 8.9 THE MADS Are Back with “Battle of the Worlds” & The Original MST3K Mads 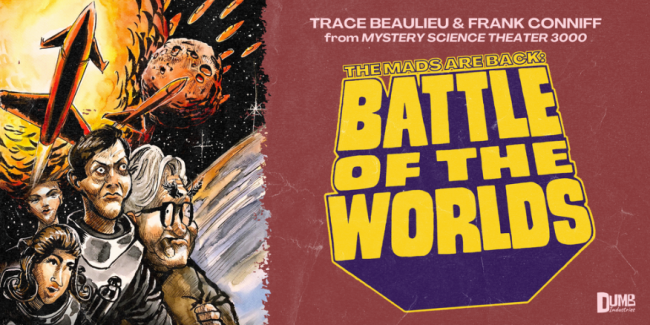 It goes without saying, but we’ll do it anyway. The Mads are back! Join Mystery Science Theater 3000 stars Trace Beaulieu and Frank Conniff (“Dr. Clayton Forrester” and “TV’s Frank”) Tuesday, August 9th, for a special livestream event as they live-riff on the 1961 sci-fi classic BATTLE OF THE WORLDS! The flick centers about a stray planet, dubbed “The Outsider,” which begins to mysteriously orbit the Earth, and threatens the humanity that attempts to explore it with lethal flying saucers. We know what Daniel Kaluuya’s response would be to that, “NOPE!”

Mentions: Show 8pm EDT. Ticket info HERE. Upon purchase, a private link will be posted and emailed to audience members Tuesday, August 9, 2022 @ 7pm ET. A download of the event provided within 24 hours of the broadcast ending, for you to keep forever. A portion of the proceeds from this event will benefit Friends In Need Food Shelf in Minneapolis. Poster prints and more merch are available to purchase at Dumb Industries.