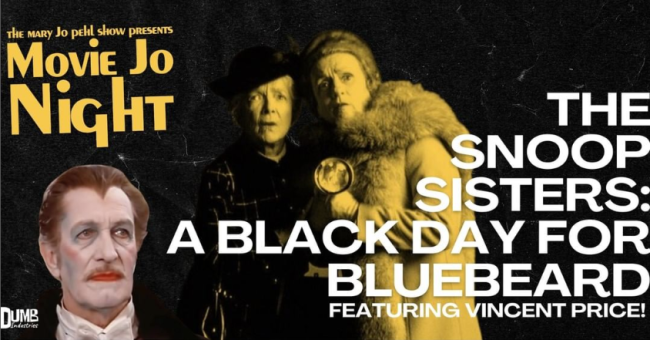 I smell cinema in the air! Join original Mystery Science Theater 3000 writer and cast member MARY JO PEHL as she watches a never-before-seen-by-her movie, on Twitch. Tomorrow’s MOVIE JO NIGHT event will bring you the 1974 episode of “The Snoop Sisters: A Black Day for Bluebeard.”  Predating Jessica Fletcher’s escapades in Murder She Wrote (RIP Angela), The Snoop Sisters series aired in the early 70s as as part of the NBC Wednesday Mystery Movie. Only four 90-minute episodes of the series were ever produced, including the episode you will be viewing with Mary tomorrow evening. Amateur sleuth sisters and mystery writers, Ernesta Snoop (Helen Hayes) and Gwendolyn Snoop Nicholson, aka “G” (Mildred Natwick), are on the case when an old horror movie actor (played by Vincent Price), hoping to revive his film career, is suspected of murdering his wealthy, divorcing wife. Other notable names in the episode include, Roddy McDowell (Galen in Planet of the Apes and the voice of The Tick’s “The Breadmaster”), and Who’s The Boss’ Katherine Helmond. Now that sounds like a Movie Jo Night worth it’s weight in gold. Enjoy!