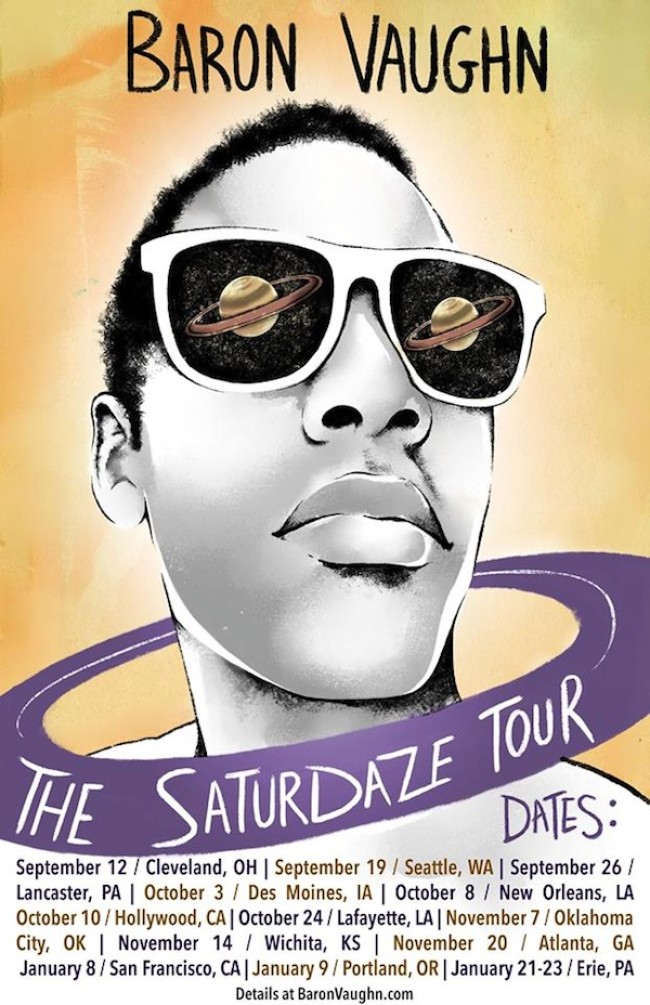 BARON VAUGHN is no stranger to the stage. In an acting capacity, you’ve seen him as Bud on Netflix’s Grace and Frankie. He was a series regular on USA Network’s Fairly Legal and you saw him on other notable programs like Law & Order, Law & Order: Criminal Intent and Rescue Me. Oh yeah! On the silver screen he appeared in J.J. Abram’s Cloverfield and Black Dynamite. Oh my goodness, that’s right! He even performed with Jane Krakowski and Sean Hayes in “Damn Yankees”! But enough about all those credits, let’s get to the comedy! Vaughn has done his stand-up on Conan, Late Night with Jimmy Fallon, Comedy Central’s The Half Hour, and more. He’s performed in the HBO U.S. Comedy Arts Festival, The Just for Laughs Comedy Festival in Montreal, Miami’s South Beach Comedy Festival, Austin’s Moontower Comedy Festival, San Francisco Sketchfest, the Bridgetown Comedy Festival in Portland, the Vancouver Comedy Festival, All Points West Music Festival in New Jersey, LA’s FYF Music Festival, Bonnaroo Music and Arts Festival, and Bumbershoot Music and Arts Festival in Seattle. WOW, this guy is talented! Well, Vaughn will be bringing his SATURDAZE TOUR to the World Famous Holllywood Improv October 10th where you will also see

Don’t miss out because you already know how good he is. GO!