Quick Dish NY: JUST A SHOW is Ready For Spring 3.26 at Sunnyvale BK 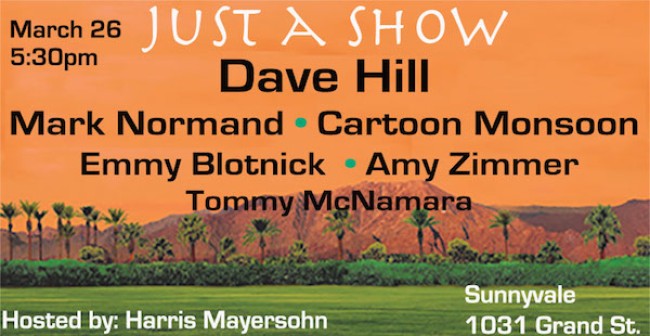 The official day of spring is almost upon us. And what does that season mark the beginning of (other than all that rebirth jazz)? Music festival madness! To get in that letting your hair down, carefree mood the JUST A SHOW gang made their own Coachella-inspired poster to show that they are just cool as those other forms of entertainment. Instead of pushing through hordes of sweaty bodies in the desert, why not experience a mix of stand-up, sketch, video and “any other conceivable breed” of comedy genre Sunday, March 26th at Sunnyvale in Brooklyn. Your monthly dollup of unmuted laughter includes this “Marchella” lineup:

Stay young for ever with power of laughter. GO!