Quick Dish NY: DOES THIS WORK? Comedy Showcase 12.2 at The Tank 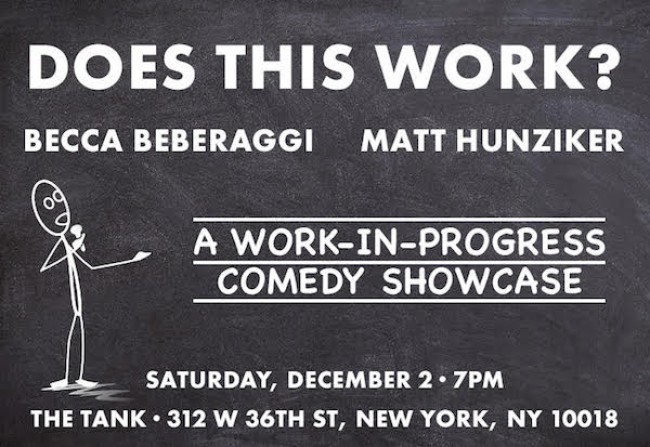 DOES THIS WORK? No, really, they need to know. December 2nd, 2017 at The Tank Theater you will literally see a work-in-progress showcase from New York’s best and brightest comedy talents. There’s only one way to improve and that’s by working out the kinks in front of a live audience. This December at Does This Work? you will see 30 minutes of “newish material” from Becca Beberaggi (Brooklyn Comedy Festival, Paste Magazine) and Matt Hunziker (Huffington Post), hosted by Babe Parker. Beberaggi is a NYC based writer, comedian and performer who’s writing has been featured on on Elite Daily, XOJane, Paste Magazine, Quntfront, Slop Sandwich with her sketch writing comfortably living on Funny Or Die/Youtube.com. She has appeared at The Brooklyn Comedy Festival, The Finger lakes Comedy Festival and She Makes Me laugh Femme Fest. Hunziker is a comedian, writer and videographer in NYC whose work has been featured in The Huffington Post and Inside Edition. He is currently editing the comedy series, “It’s Alive with Brad Leone” for Bon Appétit Magazine. Come see them in their funny and unnatural state next month!