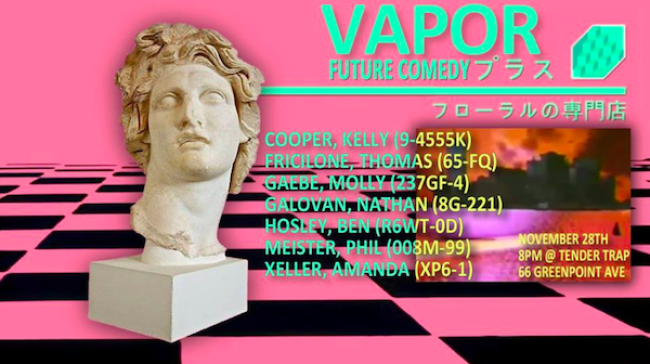 What’s better than the present? The future, of course! Get ready for an evening of stand-up and sketch comedy from THE FUTURE TOMORROW, November 28th at North Brooklyn’s Tender Trap. At VAPOR, an entire night of performance is scored by the internet’s favorite music microgenre, #vaporware! You will see performances from comedians of the Upright Citizens Brigade Theatre, Annoyance Theatre, Magnet Theatre, IFC, Above Average, and more:

This will be one futuristic night to remember. Wrap your little mind around that justaxposed string of words. GO! Mentions: Show 8pm. No currency required. Tender Trap is located at 66 Greenpoint Avenue, Brooklyn, NY 11222 off the Greenpoint stop on the G Train.