Quick Dish Quarantine: 4-Year Anniversary of YOUR LATE NIGHT SHOW TONIGHT at The Pack Hosted by Mirage Thrams 8.14 on Twitch 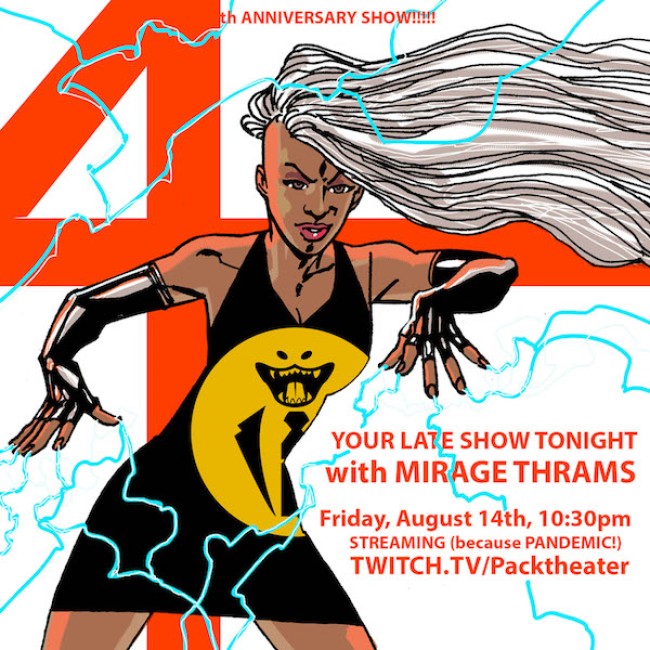 This Friday, August 14th join YOUR LATE NIGHT SHOW TONIGHT as Mirage Thrams (Second City, BlackVerse Comedy) hosts on The Pack Theater’s Twitch Channel. The monthly show features your favorite comics and celebs hosting their own completely new and original talk show each month, done in their own voice and point of view. For August’s “one-time-only, must-see” social distanced event, you will be treated to the stylings of the LA based performer, director, writer, teacher, and activist who directs the acclaimed monthly shows, BlackVerse and Color Collective at The Pack Theater. The event will also mark the Fourth Anniversary of one of the longest running and most beloved shows at The Pack. Per the show’s producers Gil Baron (Comic Relief,) Pauline Ekholt, Dempson Juvenal and Ben Kuerschner (The Tonight Show) YLNST’s success is due to their adaptability which, of course, has been quite necessary during these pandemic times. Come celebrate all the wonderfulness the show has to offer this week!

Mentions: Show 10:30pm. All Shows are Pay What You Can. You can donate via Venmo at @pack-theater. The Pack Theater is hosted on twitch at Twitch.tv/packtheater.