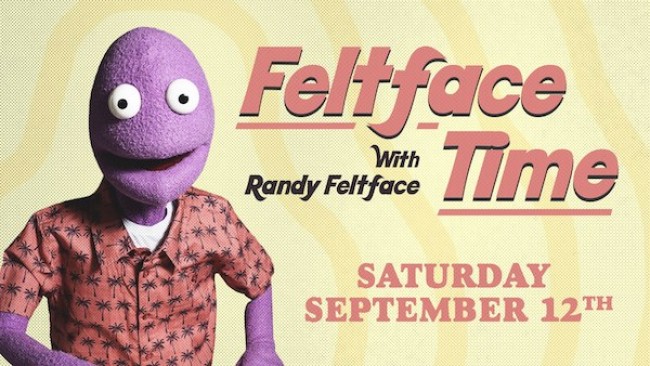 I don’t know about you, but right about now I could use some warm, fuzzy laughs from an anthropomorphic puppet person. Well, looks like my wish has come true because Saturday, September 12th, care of LA’s Dynasty Typewriter, you can get washed in the some “old-fashioned internet frivolity” at FELTFACE TIME With Randy Feltface. Direct from rural Australia, comes your newest purple face friend to bring you a cavalcade of special guests, sketches, songs, and real-time audience participation. Randy started performing stand-up comedy in 2005 and has since amassed seven critically acclaimed solo shows.  He’s appeared at Fringe, comedy and music festivals, performed on many of people-filled theaters, and traveled the world visiting prime destinations like Edinburgh, Hong Kong, Galway, New York, Singapore, Sydney & beyond! Join him in cozy quarantine this September!