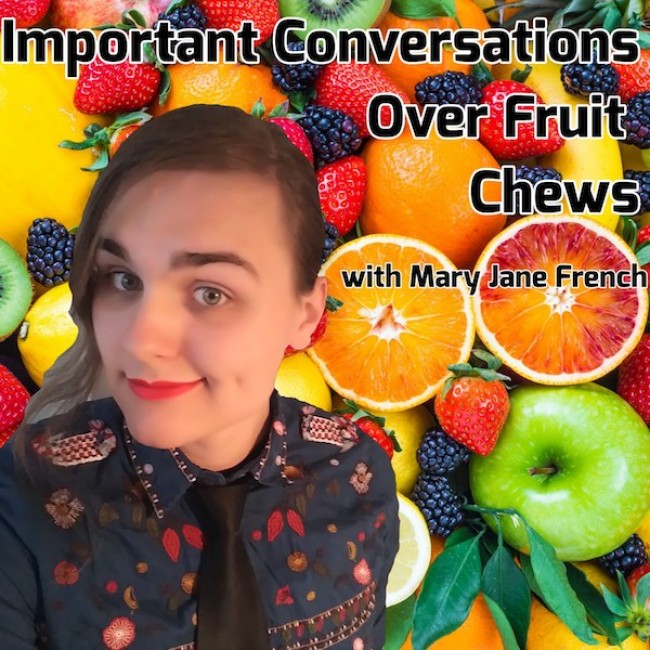 We’ve got some comedy podcast news for you to CHEW on. TOMORROW, September 24th, Mary Jane French’s comedy experiment/stunt comes to full fruition. For the last three years she’s been plotting this comedy caper. Without proof of concept, she took a shot at pitching the show to a bunch of friends producing the second year of the Portland Ha Ha Harvest Comedy Festival. The pick satisfied the tastemakers enough to turn it into a reality and we are the recipients of Mary Jane’s creative labor. Important Conversations Over Fruit Chews recorded their entire first season over the course of a one-hour pre-pandemic live show. Twelve guests gave 5 minute interviews, pulling topics from a bowl, and spent the entire conversation noisily eating Fruit Chew candies. Host Mary Jane was tasked with spending the hour eating gelatin candies which obviously affected her mental faculties enough to please the audience to no end. Be prepared for podcast topics covering everything from gender binary to phone/technology addiction. There may be times the show delves into serious subject matter, but Mary Jane getting “drunk on candy” will soon set that ship on it’s humorous course tout de sweet. Pun intended. Tune in for the premiere episode TOMORROW. The podcast will be available on Spotify, Stitcher, and Apple Podcasts. Listen to the trailer episode below NOW!