Layers: You Can’t Always Be Wealthy, But You Can Purchase “Happiness” as KYLE AYERS’ Debut Comedy Album Drops Today on BLONDE MEDICINE 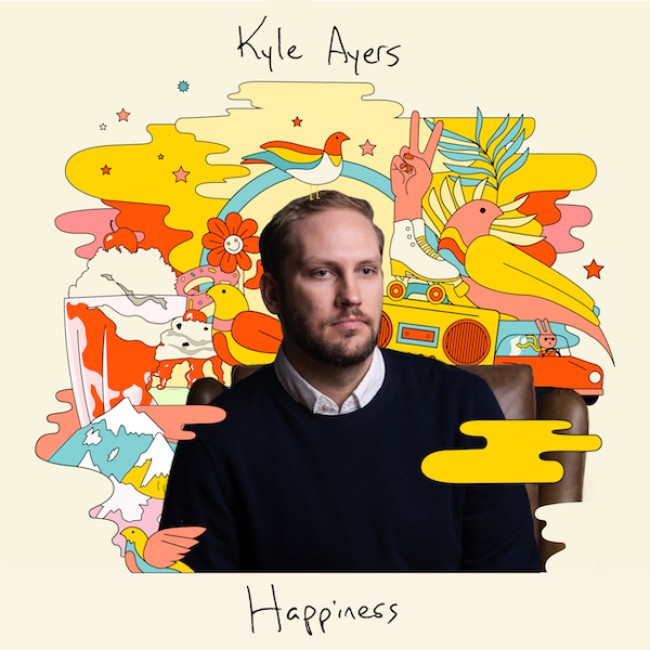 As inevitable as the dinosaurs going extinct, HAPPINESS will be spread far and wide this 2020 October day. Care of Blonde Medicine, TODAY KYLE AYERS (Conan, Boast Rattle, Nice One!), from Lake Tapawingo, Missouri, brings the world his debut, full-length comedy album named after that positive state of being we habitually try to attain. Regarding the title of the album, Kyle imparted “I try very hard to be positive and happy, but it doesn’t come easy. I put effort into it, and it’s up and down. I hope the album can bring people some Happiness. Plus, it’s fun to say ‘Now you can buy Happiness’ when the album comes out.” Well, Kyle had WAY MORE than his share of challenges recording this album. He had to contend with multiple Echo Park ambulance interruptions, evening birds, a persistent cricket, and a skateboarding audience member. Luckily, with unwavering confidence and solid riffing skills, he solidly achieves his goal of creating an album that captures how the comedian would “perform in person any given night,” (when it’s all clicking, of course).

The album literally starts out with a symphony of ambulance sounds that set the stage for some major fun. After contemplating what grisly happenings could be occurring at a neighboring music venue, we get to learn just what it’s been like to be Kyle Ayers over the years. As it turns out, the job of making jokes, “that could be your job tomorrow,” not only required a second job for the comic, but lead to embarrassing interactions with audience members after performing at uncustomary shows. You KNOW the ones. From there, we learn Kyle has a gullible side when it comes to karaoke and band groupie names. We’re looking at you “Deadheads!” On the track, “Having Sex with Quidditch Rules,” it would seem Kyle is lucky to have escaped his hometown in Missouri, having had the luxury of making fun of relatives who name all their kids after Allman Brothers songs. However, there are those moments post Missouri (we have you in mind “Drafted by Chili’s“) where meeting a childhood space hero proves not only less fruitful than anticipated for the comic, but may support the conspiracy of the moon landing being staged.

The album logarithmically reaches its pinnacle as we get a skating boarding recital and lone cricket appearance during a Wendy’s social media account joke. The laughter keeps climbing as we get some audience interaction during the “Grindstone Stevens” pr0n name/data harvesting track. But there’s really no going back, after listening to three hilarious tracks: “I Love Dinosaur,” where the facts, Kyle learned as a kid about his beloved dinosaurs, are systematically being torn asunder by that bummer of a field called SCIENCE; “It’s Fun to Eat Something That Solves Your Problems,” in which a mushroom drug trip is best not mixed with the movie “UP”; and, “Buying a Basket from Craigslist,” where trying to trick an aged wicker-loving Craigslist seller out of her basket spirals out of control when hubris rears it’s ugly head.

If it was Kyle’s mission to create that “lightening in a bottle,” live show, stand-up feel, then, folks, goal achieved, PLUS extra credit! Not only are we reminded of the pure joy of that shared experience of laughing at jokes in the pre-pandemic age, but we garner a valuable lesson that spontaneous, unplanned events can sometimes produce the best of outcomes. Enjoy that Happiness!