Layers: Even A Pandemic Can’t Kill A Comedy Cowboy’s Spirit! Listen to DUSTIN CHAFIN’S “The Zoom Album 2020” Now Out! 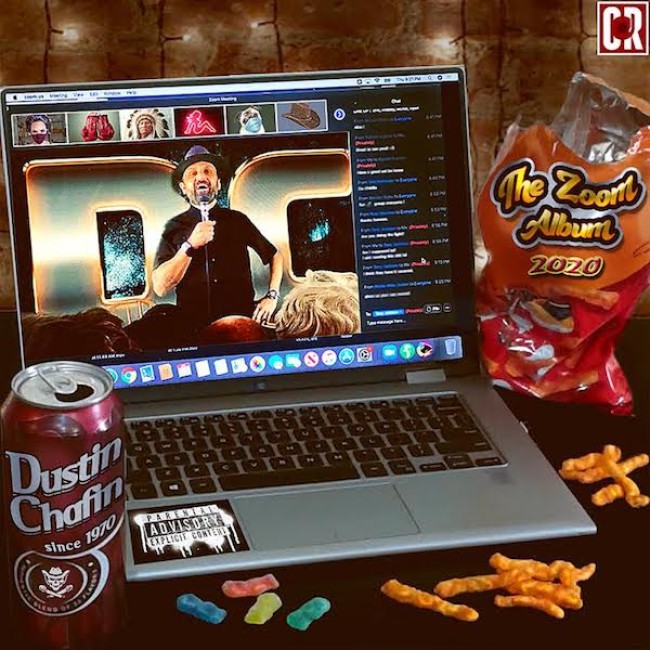 If a year ago you would have told me all comedy shows would either be online or in some creepy backyard/rooftop with a socially distant, masked audience, I would have have thought you’d been hitting the medicinal herbs a little too hard. Yet, here we are today trying to thrive in our new normal. Despite the challenges that have been presented to the comedy community, the laugh makers are persevering because, ultimately, humans require laughter. It’s an important way of coping with the world around us, and without it, life’s luster fades away. Of course, as I write this I’m downing some flavored tea with three inches of canned whipped cream. How on Earth would you want me to drink it?!!! We are now in phase one billion of a pandemic! Anyway, I’ve had the privilege of listening to comedian Dustin Chafin’s The Zoom Album 2020 this week, recorded from audiences logged in from around the world. You really know a comedian has what it takes when they can get the big laughs recording an album on a desktop screen in front of friends and strangers. Not only has Chafin managed to deliver an album rich in stories about family and the blessed pre-COVID world, but he’s managed to make the listener feel that they are just comfortably hanging with a new friend who is more than happy to share some colorfully tinted life experiences.

The album begins with a little Zoom humor in which Chafin points out the most terrifying part of streaming entertainment… the lost internet connection, or even worse, the FREEZE! From there, we are taken back in time for some reminiscing about some horrible gigs, which, in retrospect, are what every comic now CRAVES. Chafin has certainly had his share of gigs, which only adds to the flavor of this hilarious album. What comic wouldn’t want to now be riffing it up with a “Room Full of Clowns” or waiting for “Prom Kids” to show up and heckle them? From there, we get into Chafin’s early experiences in a pandemic world. Every comedian is now truly envious of Dustin’s last live event, which just so happened to be a “Greasy Pig Contest.” That track, no doubt, will make you squeal with delight. (Yes, I went there.)

Every human affected by this virus will relate to the next few tracks relaying Chafin’s experiences with face masks and pets, as well as humans trapped with their loved ones. A romp through a Blockbuster video store comes up with “Crazy Loves Crazy,” and I had to snort laugh remembering folks loitering around the check-out area hopping a watchable movie would be dropped off. Ah, the good old days! If we’re making a tally of which track gets the most laugh points, I’d have to Invasion of The Bodysnatchers point to “Couch Potato Pandemic.” Raise your hands high if being stuck in quarantine has forced you to subscribe to Brit Box, made you realize you actually despise Cobra Kai’s Daniel-San, and had you imagining your parents pawning you off Indian Matchmaker style? Guilty as charged!

The Zoom Album 2020 really shines when Chafin gets into more personal territory addressing a bunch of his family’s follies and foibles. The audience should have no doubt that helicopter parents were NOT a thing in the 70s with the “Family Strip Club.” The track makes it abundantly clear that pinball and biker gang chicks reigned supreme in a 70s kid’s world. Telling a “Family Vacation” story also adds to the comedy brownie points since it includes kids with verboten toys, Mexico, a Lincoln Town car, hustling, and switching seats to avoid the state trooper. We learn where Chafin learned to “chase that laugh” as he remembers his 70s parents dropping him in the boxing ring at the age of 5 with “Child Boxer.” It may have been the ultimate 70s style punishment, but it lead to some serious 6-year old street cred when Chafin became the talk of the Wichita Falls Texan town. We sincerely believe he “never had to pay for a Shirley Temple.”

I won’t give away too much of the rest of the album, but it cover Chafin’s ancestry and how his Choctaw grandfather’s inebritation eventually led to Chafin’s “big drinker” days. Luckily, Chafin has the gift of turning even the lowest times in life into genuine and transformative comedy. So don’t you dare pull out the earbuds before listening to the “CoVid Comedy” track because Chafin beautifully sums what comedy lost during this tumultuous year, but stresses how important it is for it to continue on it’s journey. Cheers to all the jokes continuing to be delivered, and any and all punchlines being dropped! Happy Holidays, everyone!