Quick Dish NY: MASS 33 A Birthday Comedy Show According to The Gospel of Andrew THIS Sunday 12.5 at BCC 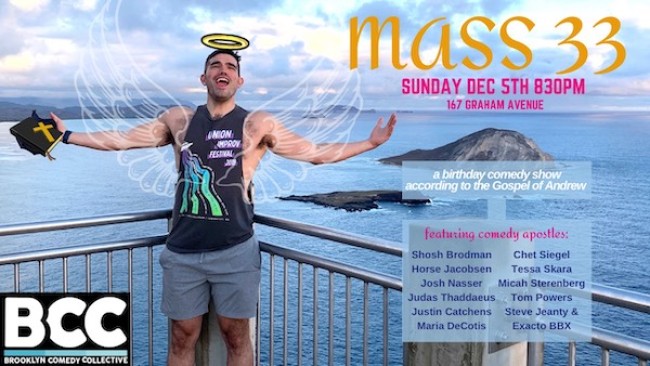 Who’s eyeballs deep in streaming Mike Flanagan’s Midnight Mass on Netflix? Let me just say, if I ever see Hamish Linklater on a boat dawning black vestments and a trunk, I’m jumping overboard. Keeping with the series’ spiritual theme, let’s talk about the upcoming celebration at the “Church of comedy,” known from this day forward as MASS 33. Join comedian Andrew Barlow who will celebrate his 33rd birthday (yes, the Jesus year) with twelve of his closest apostles, who happen to be NYC’s best comedians, at a theater with a bar in the back. You will be blessed with the gifts of stand-up, character performances, comedy musicians, and a host of wacky bits. THIS SUNDAY have a “hallelujah” for the gifted lineup gracing all attendees:

This should be one HEAVEN of a birthday comedy show! Just beware anyone that offers you promises of enlightenment from the contents of a chalice. Enjoy!

Mentions: Show 8:30pm ET. Tickets $10 at https://www.brooklyncc.com/show-schedule/mass-33. Location: Brooklyn Comedy Collective, 167 Graham Avenue in East Williamsburg (two-min walk from the Montrose L Stop (for the hipsters), 10 minute walk from Broadway G Stop (for South Brooklyn and queens from Queens), and a 10-min from the Flushing JMZ Stop (for everyone else). Follow Jeeezuz, I mean Andrew HERE.