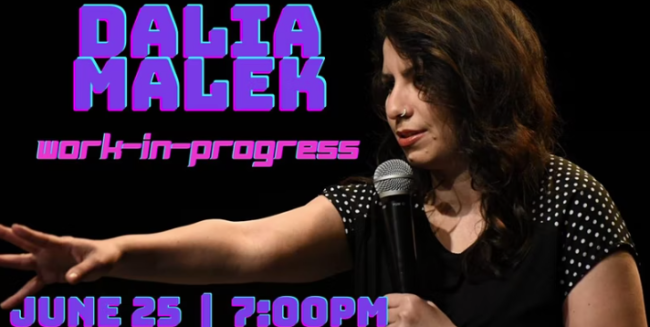 This Saturday, June 25th DALIA MALEK is back on the grind bringing Boyle Heights her “Work-in-Progress” stand-up extravaganza. Malek will bring you an hour of IRL hilarity opened by comic Daniel Zambrano (Orange County Standup). Dalia will be “preparing her solo hour “Another Castle” for the Edinburgh Fringe Festival 2022 in Scotland, knowing full well what a spectacular failure that was in 2020.” It’s a good thing she and most of the world is “intimately acquainted with spectacular failure” already!  Malek started comedy in London, UK and tours internationally, performing at major clubs, theaters, and festivals all over the world. Her stand-up was broadcast on BBC, and she has performed at festivals including the Brighton Fringe Festival, Reading Comedy Festival, and Live Nation’s Latitude Festival in England, the Edinburgh Fringe Festival in Scotland, Live Nation’s Electric Picnic in Ireland, and Egypt’s first ever Cairo Comedy Festival. Don’t miss out on enjoying her gallows humor before her shows are too pricey for your pocketbook. Enjoy!