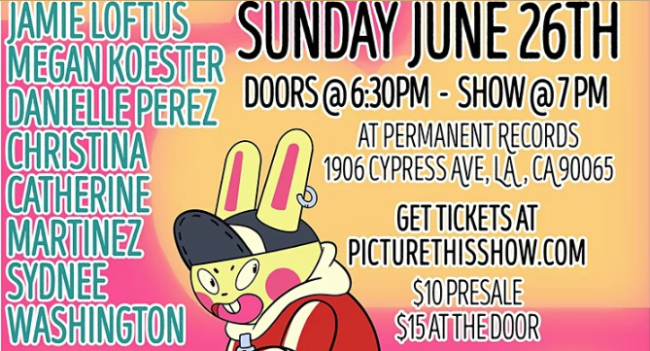 PICTURE THIS! is back at Permanent Records Roadhouse’s back patio for another live animated comedy spectacular! The show was created by Brandie Posey & Sam Varela, two gals who keep pushing the boundaries of what a comedy show can be. The live comedy show features stand-ups performing while they are drawn live by some of the best animators, cartoonists, and other artists in Los Angeles, Brooklyn, and festivals around the world! The comics do not know what the animators are drawing and the animators… surprise, surprise, don’t know how the comedians will react. Its’a wallop of fun and this Sunday’s lineup is just a gem:

ALL hosted by Brandie Posey!

Get those tickets before they melt in the June gloom rays!