Video Licks Exclusive: Take a Look at This Awesome Music Video from APOLOGIES FROM MEN: The Album 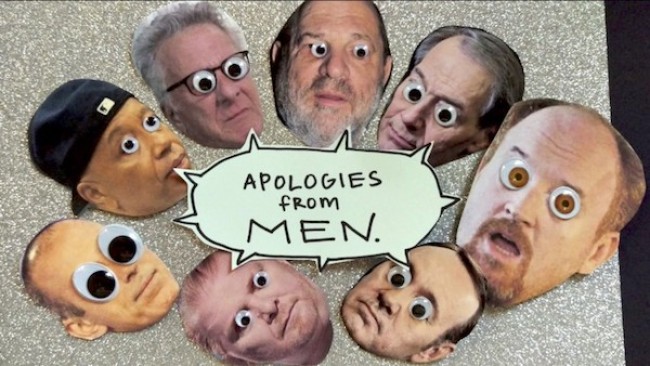 As we celebrate Women’s History Month and International Women’s Day, it’s time to bring attention to another woman’s achievements, creativity, and voice. Comedian, composer, filmmaker Lauren Maul is the female behind Apologies From Men: The Album. Maul has set those mostly awful, apologizing words of the males (Louis CK, Harvey Weinstein, Kevin Spacey, Matt Lauer, & more) whose behavior and actions have been responsible for movements like #MeToo and Time’s Up, setting them to original music. She’s also created animated video complete with paper doll renditions of these fallen men. The album and a one-night live concert event at The Peoples Improv Theater will debut TOMORROW, March 9th. You may also like to know that 100 percent of the sales revenue from the visual and audio album will be donated to RAINN, the nation’s largest anti-sexual violence organization. We are lucky enough to bring you this EXCLUSIVE video, I Do Not Believe by Charlie Rose, as an homage to Madonna’s “Like a Prayer” video. You know what he did! Hopefully, Lauren’s videos will bring some comedic relief to all you gifted and courageous ladies out there (and the good men that support you)! Enjoy! (WARNING: May not be safe for work due to blurred out bits and pieces.)

This video features the backup vocal talents of ​Alexius Smith & Lady Kate Weber and was recorded at Trout Recording.