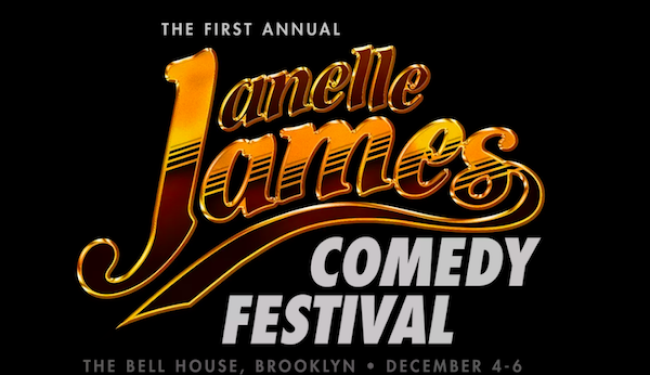 It’s just criminal how good the inaugural JANELLE JAMES COMEDY FESTIVAL is going to be. Formerly known as The Eugene Mirman Comedy Festival, The Bell House will once again be the fest’s home housing a bevy of comedy talents for three December days in Brooklyn. It’s time to wipe those tears away now that the comedy baton has been passed to Janelle, who will be “keeping the same zany vibe and raucous laughter while adding her own personal touch” to the festivities. Expected featured shows each night, such as the “Comedians Who Live Nearby” and the “Comedians Who Said ‘Well, Who All Gonna Be There?'” showcase. In addition to the announced lineups, each show will feature SPECIAL GUESTS. Insert loud “Ooooh & Aaahs” here. The lineup so far includes The woman with a comedy festival named after her, Janelle James. (image by Matthew Salacuse)

As former fest co-founder and future participant, Eugene Mirman says “I am thrilled to be part of the first annual Janelle James Comedy Festival. She’s so funny and it’s a joy to see the joke of a self-titled comedy festival live on and be reborn.” For those not in the know, Janelle is a New York based comedian that can be seen on The Comedy Lineup on Netflix, Night Train with Wyatt Cenac (NBC/Seeso), @midnight (Comedy Central), Uproarious (Fuse) and Crashing (HBO). Her debut comedy album, Black and Mild was released on September 29th, 2017 on Audible, iTunes, SiriusXM, Pandora, Spotify and anywhere else the finest comedy is sold and streamed. Also, she just wrapped as a staff writer on The Rundown (BET) after touring with Chris Rock on his Total Blackout Tour. I think you are in qualified hands, kids. Get your tickets TODAY!