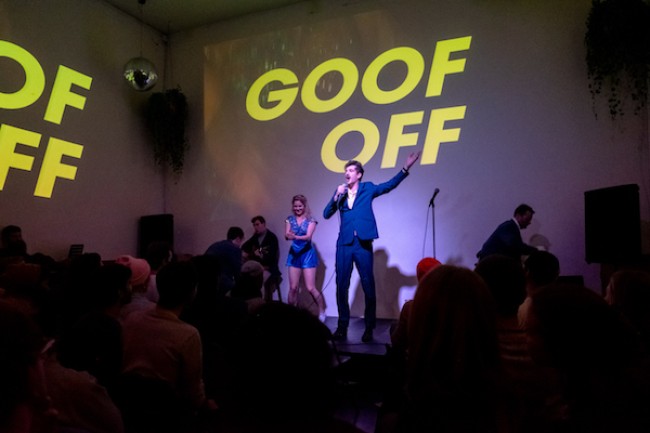 GOOFY, the immersive digital vaudevillian variety show, has found it’s new home at the Brooklyn Comedy Collective. Up until now, you were treated to surprises like an interactive bit dedicated solely to the people who showed up tardy to the show, a boo/cheer boxing match guided by the screen, and a striptease by song and dance host, Thomas Frances, (who eventually borrowed clothes from the audience). For the February’s Valentines themed show, expect a screen to stage love story, a visit to the GOOFY restaurant where the attendees are the meal, and a reveal of GOOFY’s latest sponsor guided by band leader Kyle Gordon. Music, dance, and comedy performances will feature Meg Stalter, Walter Kelly, Bardia Salimi, Kelly Cooper, Andrew Tisher, and many more.

Isn’t it about time the goofs ruled the roost? Enjoy this GOOFY promo vid before taking the plunge!