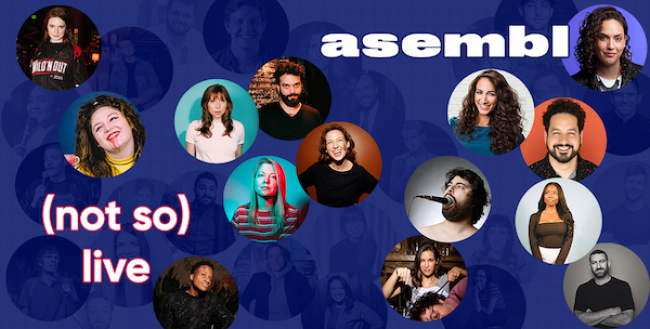 No more talking to a sock puppet in your closet! It’s time for some live entertainment with other humans, people. Social platform asembl is bringing fellow air inhalers together for a series of comedy events online called (Not So) Live. Not only will you be able to hear an actual audience laugh, but you’ll be surrounded by friends and family who participate, as well as be able to interact with the performers. Oh my! The shows are happening three times a week through May 1st and will feature both up-and-coming and established comics from New York to Los Angeles. Comics you can expect in the upcoming events include:

Stimulate those senses safely with some comedy!

Mentions: Monday, Wednesday, and Friday at 9pm ET. Just go to https://asemblco.com/not-so-live/. Audience will join via teleconference. You have the option of turning off your mic/camera. The show is FREE but a link to the tip jar will be posted. Show are not kid friendly.