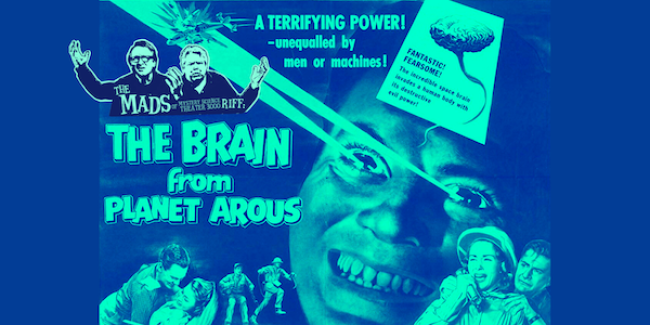 Freaks and geeks, listen up! Tuesday, November 17th, Mystery Science Theater 3000 stars Trace Beaulieu (“Dr. Clayton Forrester”) and Frank Conniff (“TV’s Frank), known collectively as “The Mads,” will be bringing you their next livestream! A screening of 1957 black and white B-movie and cult classic THE BRAIN FROM PLANET AROUS, will be broadcast live via a private YouTube link for the comedy duo to riff to their hearts content. The upcoming livestream will be the fifth such online event “The Mads” have produced in collaboration with Dumb Industries.

The film tells the story of Gor, a powerful criminal brain from the planet Arous, who assumes the body of scientist Steve March with world dominating consequences. Last week’s A Night of Shorts livestream was the first to sell over 3,000 tickets. Cha-ching! Previous livestream guests have included Victoria Price (daughter of horror legend Vincent Price), Jonah Ray (host of Mystery Science Theater 3000) and Rich Coz (host of MeTV’s Svengooglie). Tickets are now on sale for just $10. A portion of the proceeds will benefit The Friends in Need Food Shelf, a community-funded food shelf and nonprofit serving the residents of Minnesota’s Cottage Grove, St. Paul Park, Newport and Grey Cloud Island communities.

Meanwhile in October, there’s more Mads fun to be found. The comedy duo have released an excerpt from last week’s A Night of Shorts livestream featuring the comedians having some holiday fun with the Coronet’s “Halloween Safety (Second Edition)” educational short from 1985. This video marks The Mads‘ first-ever official recording of their touring live show, which has moved exclusively to the livestream force post theater shutdowns. You can get your teeth into the 14-minute vid below. Happy Halloween! Don’t cut your eye out!