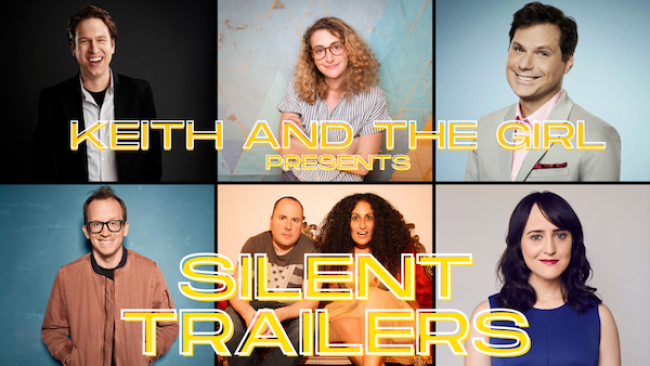 Legendary podcasting duo Keith and The Girl have announced the juicy details for the next edition of their popular movie-themed game show, Silent Trailers. Can you believe it’s the 16th year of podcasting for the duo?! They’ve still got it, kids! Time, of course, will NEVER stop Keith Malley from showing off his film knowledge, so that means the Silent Trailers show will be going on eternally, even if there’s kicking and screaming. Last episode, Keith faced off with the team of Tom Scharpling, Andy Kindler, Baron Vaughn, Aparna Nancherla, and Mike Cannon, and, despite a rocky start, they pulled off a legendary victory with the final round clue being from a movie I’d totally forgotten about, Don Jon! Thank the stars for vanity projects! Saturday, March 20th Chemda will be describing movie trailers to Pete Holmes (HBO’s Crashing), Michael Ian Black (The State, Stella), Chris Gethard (Beautiful/Anonymous), Jo Firestone and Mara Wilson! As many of you might be aware of, co-host Chemda has virtually no celebrity knowledge, which makes the movie descriptions a laugh riot, and it only helps that Keith has seen every movie known to man. This time we can predict Keith will be out for blood, so I hope the team of comedy greats is prepared! Ticket info below!