Quick Dish Quarantine: ‘The Mads’ from MST3K Announce The Details of Their April 13th “Night of Shorts 3” Livestream PLUS NEW Short Reveal! 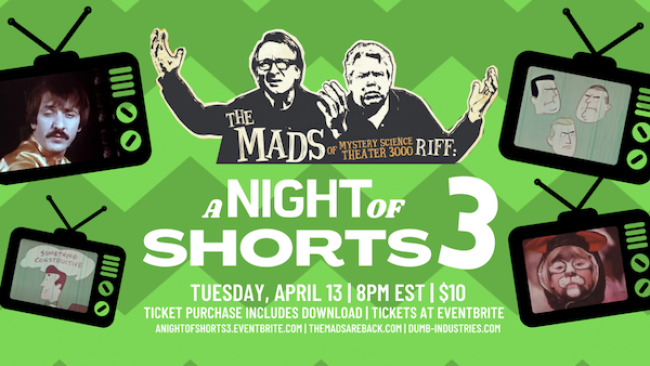 Because you should never miss a promotional opportunity AND to coincide with the livestream announcement, The Mads released a NEW short film on their official YouTube channel (an excerpt from their January 2021 livestream, A Night of Shorts 2). The short features Beaulieu and Conniff riffing over the 1949 education Coronet short “How To Keep A Job.” Looks like the eager beaver always get the entire dam. Watch the short below and scroll down a bit further to get your livestream tickets!

Mentions: Tickets currently on sale for $10. A portion of the proceeds from ticket sales will benefit The Friends in Need Food Shelf, a community-funded food shelf and 501(c)(3) nonprofit serving the residents of Cottage Grove, St. Paul Park, Newport and Grey Cloud Island in Minnesota. All ticket holders receive a link to download a recording of the show afterwards, as long as tickets are purchased prior to the broadcast. Subscribe to The Mads YouTube channel to keep up with the latest content from the duo.