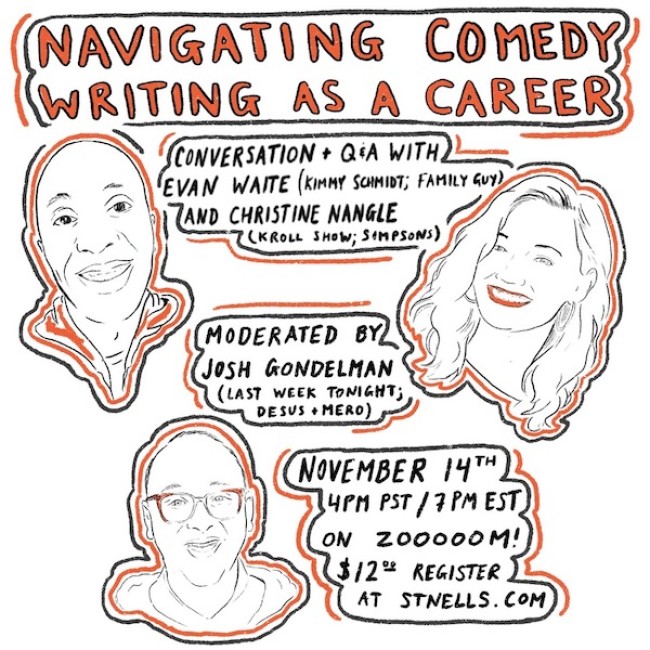 Curious how working comedy writers have achieved success in the industry? Well, it appears it’s your destiny to find out! THIS Sunday, November 14th, St. Nell’s Humor Writing Residency will present Navigating Comedy Writing As A Career, a panel/conversation/Q&A with Evan Waite, Josh Gondelman, and Christine Nangle on Zoom. These amazing writers will discuss their careers, how to work as a comedy writer, and how they’ve succeeded in a crowded field. No easy achievement, I’m sure!

Even Waite is a co-producer on Family Guy and has wrote on Inside Job (Netflix), 3 Busy Debras (Adult Swim), Fairfax (Amazon), The President Show (Comedy Central), and The Unbreakable Kimmy Schmidt (Netflix). Pennsylvania native Christine Nangle currently writes for The Simpsons. She received a Peabody Award, Writers’ Guild Aware, and four Emmy noms for her work on Inside Amy Schumer. She’s also written for Comedy Central’s Kroll Show, USA’s Playing House, Fox’s The Mick, and NBC’s Saturday Night Live. And last, but certainly not least, Josh Gondelman is currently a writer and producer for Desus & Mero on Showtime. He spent five years at Last Week Tonight with John Oliver, starting as web producer and going on to earn four Emmy Awards, two Peabody Awards, and three WGA Awards as staff writer. I don’t think you need any more credits to understand that these three are legit! Learn from the best by signing up today! Details below.