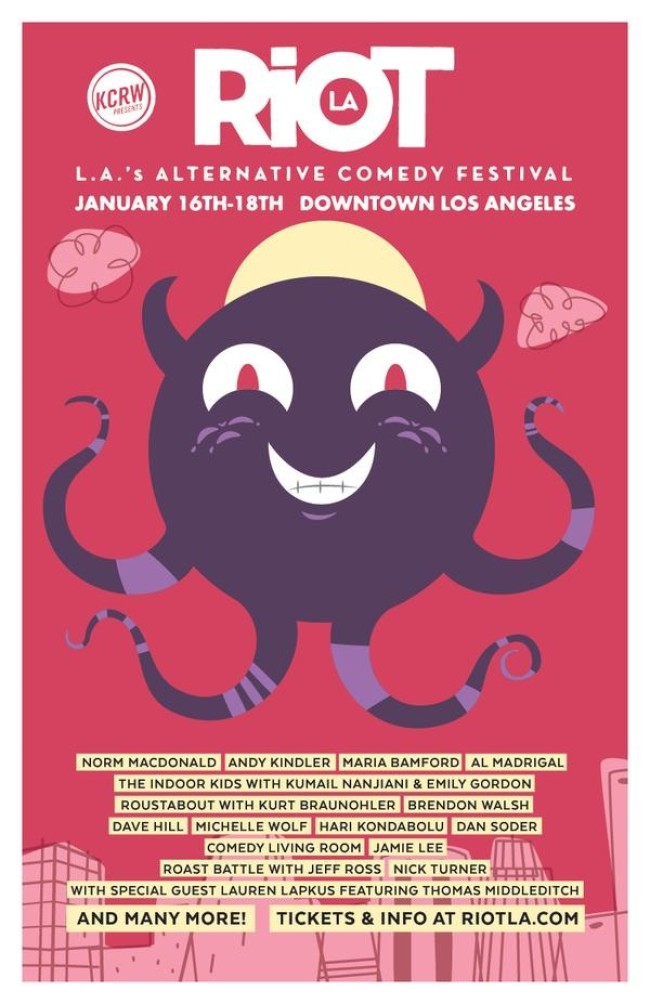 Hey gang, the RIOT LA 2015 Comedy Festival will be illuminating the streets of DTLA with uproarious laughter January 16-18, 2015. As per the usual, the lineups are tremendous and the surprises are, super secret. The festival takes place within a few blocks on Main Street between 2nd and 5th Streets in downtown Los Angeles. Saturday and Sunday there is a literal block party at THE LOT, a huge Astroturf-covered parking lot located in the center of the festival with local beer and wine, food trucks, an arcade, a photo booth and so much more. This year the festival promises

• Live podcast tapings of The Indoor Kids with Kumail Nanjiani & Emily Gordon, With Special Guest Lauren Lapkus (OITNB) featuring Thomas Middleditch (Silicon Valley)
• Comedy Central Studios’ Roustabout hosted by Kurt Braunohler
• A special screening and show of This Is Not Happening with Ari Shaffir before its premiere on Comedy Central
• KCRW’s UnFictional Live storytelling show located in the newly-­‐opened and renovated Regent Theater.
• “The Roast Battle with Jeff Ross” : Stand up comics competing in a match of wit and insults
• The Lot Stage is a brand new tented stage this year, located within The Lot featuring popular LA shows Comedy Living Room, The Goddamn Comedy Jam, and Brew HaHa

It’s gonna be sheer joyous madness. Get your passes earlier!

Mentions: Weekend passes are $90, which includes admission to The Lot. Get all info for Superfan passes, VIP, and individual tickets HERE. Full schedule is available HERE.