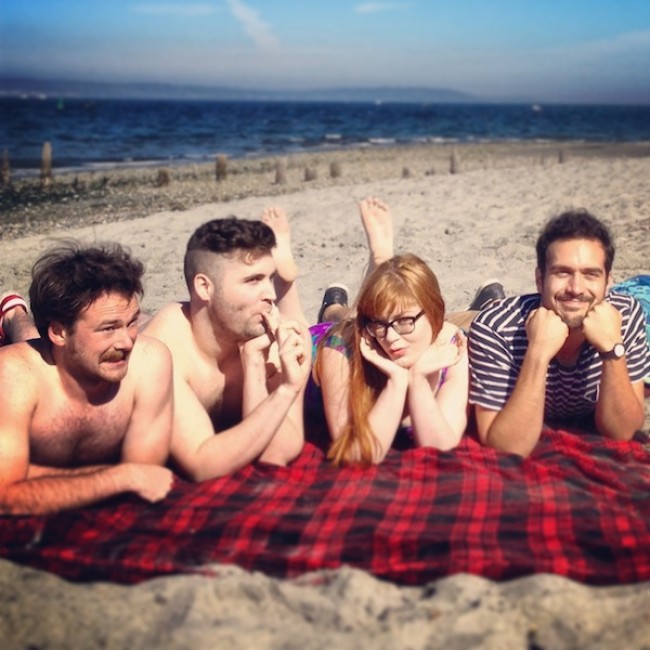 With his hit series, Real Adult Feelings wrapped up and under his belt, writer and Seattle native JASON RYAN dishes on dating, poverty and what’s next. He specializes in writing eloquent grossness, true art in our book. If you’ve watched his internet sitcom (We know you have.), you know nothing is off limits. And, we wouldn’t be Comedy Cake if we didn’t ask. So, get ready to scar your brain forever, as we sit down with Jason to talk Bromances, Drinking Straw Jacuzzis and Penile Pearly Papules – In fact, we’re just gonna go bleach ourselves now. 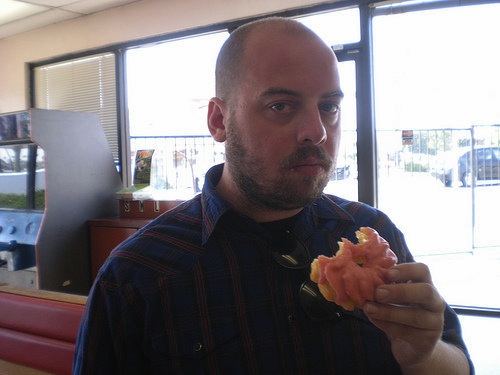 COMEDY CAKE: In Season Three’s latest episode, Rob burned the house down in Ethan’s dream. Have you ever caught anything on fire? What happened?

JASON RYAN: I don’t think I’ve ever caught anything on fire, accidentally at least. Wow. That answer makes me seem like an arsonist. I just mean like campfires and stuff. You got that, arsonist investigators who read comedy blogs? That’s what I meant!

CAKE: Julie gets turned on (or wants to) by Rob’s jokes, in Season One. Be honest, what jokes do you use as pick up lines?

JASON: Well, I’m old and shacked up now so I haven’t used a pick up line in a long time but the jokes Rob uses in that episode probably aren’t that far from what I would’ve used back in my single days when I had no shame. The “girl, are you borderline suicidal thoughts because you’ve been running through my mind all day” joke doesn’t seem that far out of the realm of something I would say. Potential partners should know they are about to hitch their wagon to a weird death-obsessed star.

CAKE: What or who inspired the creation of a series about a group of friends, living in a dead mother’s house?

JASON: That just came from trying to find a way to get all these characters living together in one house. We wanted to make a “group of young hilarious idiots living together” type sitcom so we just tried to come up with a situation that would lead to the gang being under one roof that wasn’t done before. Again, since I’m obsessed with death the inheriting an estate idea came up early and we just went with it.

JASON: That actually came from the mind of my co-writer/co-producer/BFF Colin Thiel who wrote and directed that episode. So you’re in luck because I can’t really answer it. Feel free to stalk him on social media and ask him if you want. I’m sure he won’t mind. 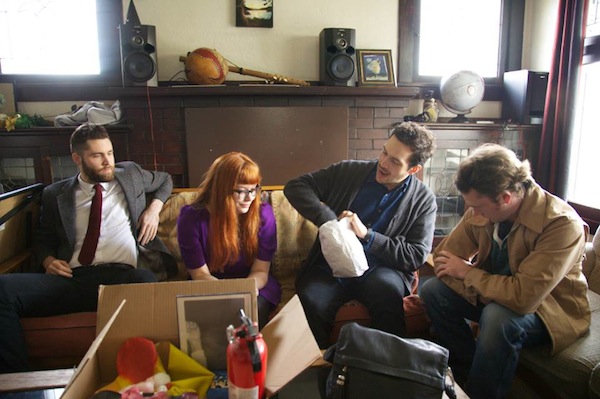 CAKE: But, Rob does pick up the receptionist at Planned Parenthood. Where is the weirdest place you’ve picked up a date, or a date picked up on you?

JASON: I was a pretty boring dater so nothing too wacky. There’s actually a scene in another episode (Season 1, Episode 4 – “Alice”) where Alice gets hit on by a dude (Steve, played by the hilarious Andy Palmer) at her work, he brings her a crossword puzzle book. That happened. I did that to a girl that worked retail I liked. It didn’t go well.

CAKE: Also in Season Two, we see everyone use straws to create a jacuzzi for Greg (that’s love). Did anything gross happen, during the filming of that?

JASON: Surprisingly no. I actually thought it would take a little more persuading to get the cast fully on board with doing that since it seemed gross as hell to me but they didn’t bat an eye. We’d already done a full season together by that point so they were already pretty comfortable with each other so they didn’t care. At least Eric Sanders (who plays Greg) wasn’t completely naked, unlike the end of the season 1 finale.

CAKE: So Alice and Greg got married. What’s the key to making a sham marriage work?

JASON: Not giving a shit about the institution of marriage.

CAKE: Speaking of Alice, poor Rob never gets his chance. How do you think taking the storyline that way paid off?

JASON: To me Rob views Alice almost like a little sister more than anything else. There’s affection, love and being protective but it’s not romantic. There’s a bit in the season 2 finale (“Welcome Home, Alice – Part 1”) where Rob breaks down a list of why Alice isn’t his type romantically which he means. I think realistically Alice is just a little too weird for Rob. She’s perfect for Greg though (spoiler alert).

CAKE: Kate really gets Ethan’s and Rob’s bromance. How important is it for a spouse to encourage a bromance, like that?

JASON: Well, speaking from experience…pretty important. Both myself and my aforementioned BFF, Colin, have long term girlfriends we live with and they put up with our bromance like a couple of champs. 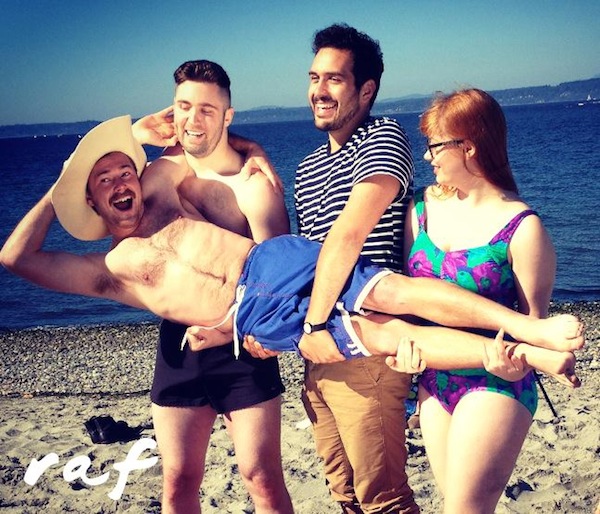 CAKE: The LA Times called Real Adult Feelings “an internet sitcom.” Was this the impression you intended for the web series? How did you feel about the review?

JASON: Honestly, we’ll take it. I mean, we are on the internet and we are a sitcom so it’s accurate. As long as people don’t think we’re a gritty cable drama or gritty children’s pubic television program it’s a good review in my book.

CAKE: The cast members have production roles, as well. What are the challenges and advantages of everyone having their hands in things?

JASON: Other than the case of Eric Sanders, who plays Greg and was a writer/producer from the beginning, it didn’t start out that way. We originally just cast the actors to act but, as our viewers are probably aware, we didn’t start off so hot production wise. I mean, I was literally filming with one hand and holding a mic with the other, lighting things myself most of the time with like touch lamps, editing myself…and it shows in the first couple episodes. Mikiech Nichols, who plays Ethan, started being like “hey, you know I went to film school, right? I can help you. Let me edit some of these.” I ended up pawning directing off on him for the Halloween episode in season 2 as well. Devin Badoo, who plays Rob, is a comedian and writer in his own right, and when we went into season 2 he was like “hey, it’d be rad if I could contribute some stuff this season.” Sierra McKenzie aka Alice started pitching ideas and jokes and so we started crediting her as a contributing producer. It just kind of built like that the more comfortable we all got with each other. The more time we all invested and the bigger it got the more it made sense to let people contribute in bigger ways. In other words: everybody is insanely more talented than me.

CAKE: How did you cast these fine folks, anyway?

JASON: Our casting process was a mixture of just asking people we knew (Mikiech Nichols as Ethan, Katie Bicknell as Kate) and holding casting calls (Sierra McKenzie aka Alice who just answered a Craigslist ad). Devin, who plays Rob, was kind of both. He knew of him through mutual friends but we still had him read for the part. Eric Sanders was just my buddy whom I drafted to co-write/co-produce in the beginning but when we started talking about the character of Greg it just made sense to have him play him even though he hadn’t really acted much before. He would act out Greg bits and lines during the writing process and it was perfect so I was just like “well, you’re playing Greg, I guess. Good luck!”

JASON: Oh, boy…so many to pick from. I’ve had some strange ones. Probably the time I sort of accidentally lived in Chicago for a couple months. I had been living in New York and miserable so I decided to get out of there ASAP. I just got a one way train ticket out of town, the furthest east I could afford which was only Chicago sadly. I crashed with a friend until I could afford to get a ticket back to Seattle but it ended up taking a while (I suck at not spending money on dumb shit) so I just lived on her couch for like 3 months and doing stuff like selling blood and basically all of my possessions. I ended up back in Seattle with not a single dime left and like an empty suitcase. That sure sucked. 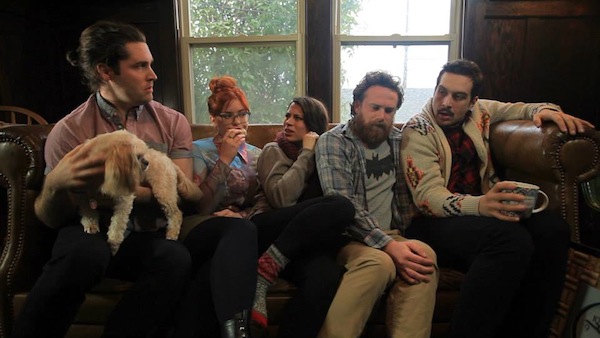 CAKE: With the series finale completed, what’s next for everyone?

JASON: Most of the cast and crew is actually helping me make a new original spec pilot over the summer called Bros For Hire. It stars Mikiech and Eric as step-brothers who decide to take out a billboard that says “Bros For Hire” and their phone number and just do whatever weird shit people hire them to do. It will have the other cast in it in smaller roles. The behind the scenes crew is the same too, same DP and producers, etc. We’re one big happy family that can’t quit each other…unlike my real family.

CAKE: What will you miss the most?

JASON: Building a world with everybody together. Ethan, Rob, Alice, Greg and Kate really took on a life of their own after a bit and just living with those characters, understanding them and finding the rhythms and little quirks together as a unit is a feeling that’s hard to duplicate. Even now, months after the wrap I’m still thinking of jokes for Rob or Ethan or Alice and Greg and wishing I could hear the actors deliver them. I guess that’s a good sign that our show was decent and we wrote solid characters which is something I’m proud of. Three cheers for me!