Icing: Laughing for Two – Alex and Eric Talk Living Together 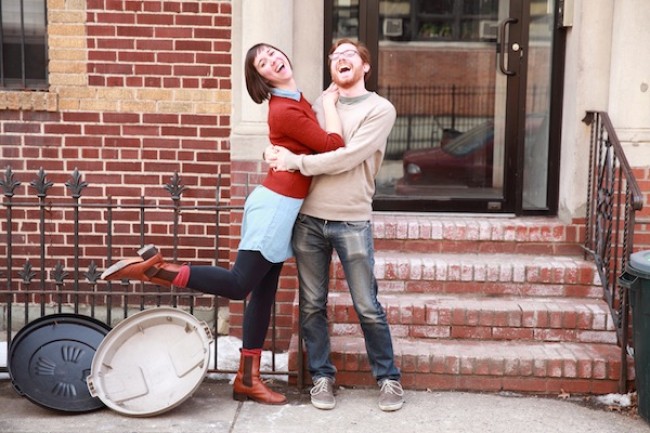 Unless you’ve been hiding under a rock (You read CAKE though, so how could you be?), you know that Alex and Eric Live Together is one of the most realistically hilarious glimpses into married life. With their raw, quirky web series getting more and more attention, Alex Harris and her real-life (and on-camera!) hubba, Eric LaPlante sit down with CAKE to get even more real – that’s what we do! We’re lovin’ that this series has a dominate female character. So, hold on to your “Hibachi Bellies” as we explore the process that brought you Postal Service Survival, Dead (Sorta-Pet) Mice, Singing Songs on the Subway and French Toasted Brownies?! – Holy crap Alex, you just might be my platonic soul mate!

COMEDY CAKE: What sparked the creation of “Alex and Eric Live Together?”

ERIC LaPLANTE: We had a gift we needed to share with the world so we decided to share it.

ALEX HARRIS: I know that there was an initial moment, when we thought, “We should make a web series!” But that was over 4 years ago, so I can’t remember it exactly! I do know that humorous incidents would continue to happen and we thought it would be funny to document them.

CAKE: You specialize in celebrating the mundanity of coupledom. How do you catalog so many scenarios?

ALEX: Before any writing occurs, we record ideas in an ongoing Google Doc. Lately, if something funny or weird happens in real time, we’ll hum the ending of the the series’ theme, and that usually helps us decide if it’s worth shooting.

ALEX: That depends on how you define “writing process.” I’m an improviser, so I tend to lean more towards figuring out a basic outline of beats to hit. Eric, being the one behind the camera as well as in front of it, tends to lean more towards a scripted episode to get an idea of shots and camera angles. Somehow, the two of us find a happy medium, and that’s our “script.”

CAKE: How do you handle actual “mail handling catastrophes”?

ERIC: We sigh. We yell. We do nothing.

ALEX: I still get frustrated, but, for lack of a better phrase…shit happens. So, we just move on. Plus, we’re extra careful when we send our own mail. At least I am!

CAKE: It’s refreshing to see a…uh…strong female lead. What process did you use to create so many outlandish facets of Alex?

ALEX: The short answer is that she’s an exaggerated version of myself! I wear my heart on my sleeve, and the same goes for this Alex. Take the “Alex and Eric Make Breakfast” episode, for example. I truly wanted that brownie to taste like a new kind of dessert, and it was an exciting idea! Eric and I still talk about our
ever-elusive dream of opening a cafe called, French Toast Brownie, where every dessert you can imagine is “french toasted.”

CAKE: In the mouse episode, Alex freaks out about a mouse in the house. How does this parallel real life events? Is there an actual “Felix” out there?

ERIC: It’s safe to say I handle mice better than Alex. Perhaps the mice are afraid of us since Felix. We haven’t had a mouse since.

ALEX: It’s true! We’ve been so lucky this winter. Felix is based on a real mouse. He (or she) seemed to have made quite a home in our apartment, much to our dismay. And, yes, I don’t handle mice well. Every time we were reminded of Felix’s presence, I would get so annoyed–and then that SNAP actually occurred one night, and I felt awful. I’m so sorry, Felix.

CAKE: How addicted have you become to video games?

ERIC: Candy Crush is pretty much the only game I play. Alex has managed to delete
it. I on the other hand, just got to a level where I have to spread the jam everywhere.

ALEX: It felt so refreshing to delete Candy Crush from my phone! I was free. I’m hoping that all is not lost for Eric. Someday, he’ll come out on the other side. It happened with Plants vs. Zombies, I’m sure it’ll happen with Candy Crush…at least I hope. 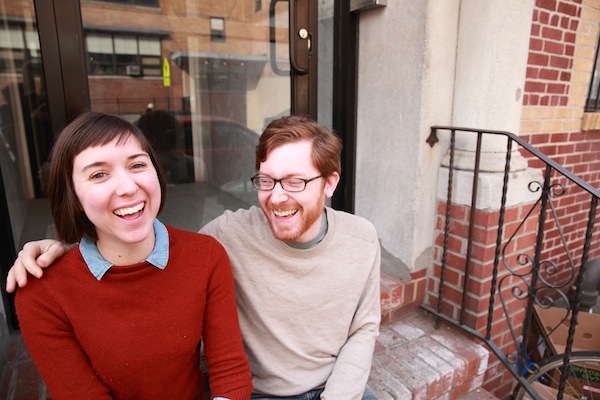 CAKE: We imagine there was real life inspiration for the Hibachi Belly song. Tell us about that (Yep, we get in there).

ERIC: I am not a big fan of hibachi. So by the will of the gods it is I who suffers the most from eating it.

ALEX: Of the two of us, I’m the one with the “iron stomach,” as Eric calls it. One night, we went to hibachi with friends, and I felt completely fine afterwards. Eric on the other hand…

CAKE: We noticed your affection for Jurassic Park. Are you affected so deeply by it, in your off-camera life as well?

ERIC: I know the movie well. Alex has it line-for-line memorized. I did recently re-watch it and never realized how un-kid-friendly one line was from the lawyer when he couldn’t think of the word for autonomous, and said ‘auto-erotical’ instead.

ALEX: I love Jurassic Park. LOVE it. Sometimes when it’s raining and there are puddles, I take a second to look at a puddle and hope that I see it move, as a sign that there’s a T-Rex not too far away. Not that I want the world to be overtaken by dinosaurs….but wouldn’t that be crazy? And I do find opportunities to quote the movie just about once a week–it just happens!

CAKE: Great shout-out to The Wire! What other songs do you sing so infectiously (Non-TV Show Theme Songs included)?

ALEX: Every month, I discover a song that’s been out for at least a year, and become obsessed with it. The most recent one is probably Sia’s, Chandelier. I played that song on repeat on the daily and loved walking to the subway listening to it. It’s such a “YOU CAN DO IT!” song to me, despite the somewhat tragic subject
matter. Aside from random pop hits, we actually do sing a lot of TV Show Theme Songs. Lately, it’s been the theme to Game of Thrones–now that’s a song to walk to the subway to!

CAKE: We see Alex and Eric prepare for crisis situations? Who is better in real life emergencies? Have there been any during filming?

ERIC: It is my great hope that one day either adrenaline or real muscle power will allow Alex to pull my hurt body from a dangerous place should the need ever arise.

ALEX: We’ve been lucky that there haven’t been any scary situations during filming. But, one night a long time ago, Eric sliced his finger while chopping vegetables, and I remember yelling in a panicked voice, “I don’t know what to do!” But, given a more dire opportunity, I will rise to the occasion. Also, there’s an E.R. down the street from us. 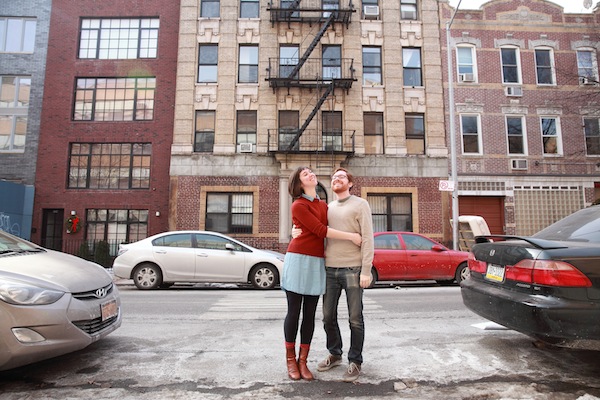 CAKE: How do you feel about the Olympics in real life as you do in the series (Please, say just as crazy)? Do you have a favorite Olympian?

ERIC: For that particular Olympics, NBC was always holding the most popular events for playback at night, even though they had been played hours before. It was impossible to not get spoiled.

ALEX: To be honest, I don’t actually set my schedule around the Olympics. But I do enjoy watching the gymnastics in the summer, and ice-skating in the winter. And I just don’t want to get spoiled!

CAKE: How does the bed bug situation, in NY, compare to the snowfall situation?

ERIC: It’s like the great white whale, always heard of, never seen. Except in our case, we are not looking for it. As a hardy New Englander, Eric has seen his fair share of snow. Alex?

ALEX: I’m from California and had never even heard of bed bugs until I moved to New York. That said, I’m still very careful. I don’t even sit on the benches on subway platforms because I read that they can carry bed bugs.

CAKE: What are your real thoughts on camping? Can you pee outside like a pro?

ERIC: Sure I can just find a tree. Alex?

ALEX: I’m not the biggest fan of camping. I love the outdoors and I love the beach. But I much prefer day trips. How great are day trips? You get up, you plan to spend the whole day at the beach, you get a
nice tan (I would, Eric is not so lucky), you go for a few swims, you come home and shower in your very own bathroom, and then later, you sleep inside, on a nice mattress, with four walls surrounding you, and plenty of room to stretch. The same idea would work for hiking, and other outdoor activities. Day trips….think
about it.

CAKE: What’s the longest amount of time you’ve been apart?

ERIC: The week before we got married, Alex was in CA ahead of time while I stayed in NY.

ALEX: In the 5 years we’ve been together, that’s probably the longest. But it was an unusually exciting time apart because we knew that when we did see each other next, we’d be only a few days away from being married.

CAKE: What’s the dumbest thing you did when you had the house to yourself?

CAKE: Is someone a Karen Carpenter fan? We already know you are; we just want you to explain yourself (The Carpenters Christmas Album IS in our rotation.)

ALEX: I must confess that I only know a few songs from The Carpenters (Close to You and Superstar are two must-plays in my music collection). But I do know that Karen Carpenter had a beautiful, unique voice, and that she died far too young. And Top of the World will continue to be one of those songs I can listen and sing to anytime.

CAKE: Can you explain to gaming novices exactly what Settlers of Catan is and what inspired an episode about the game?

CAKE: What are each other’s worst bad habits, and how do you deal with them?

ERIC: I find many bobby pins around all corners of the apartment. I deal with them by trying to figure out an episode angle.

ALEX: I can’t help that I lose bobby pins. Those little guys are easy to lose track of. Eric tends to fill recyclables with water so that they have time to soak and get any food remnants out, before being put in the
recycle bin. And that’s great! But what’s not great, is seeing those recyclables, filled with water, accumulate on the countertop for days.

CAKE: What’s the funniest argument you’ve ever had?

ERIC: I’m a big fan of splitting desserts and Alex likes to eat her own. Those
arguments are kinda fun.

ALEX: They result in Alex wanting a second dessert, or Eric
suffering from a dessert-version of hibachi belly. 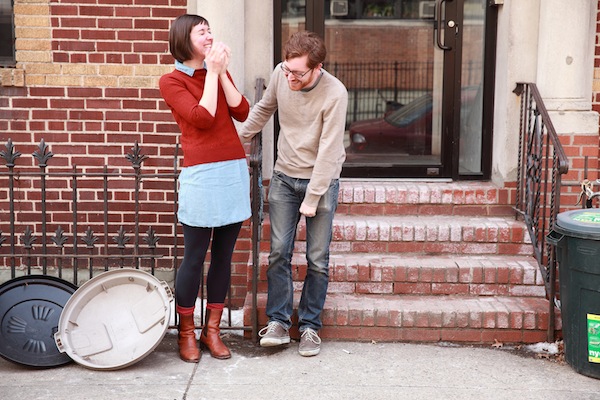 CAKE: What are your hopes for the growth of the series?

ERIC: Hello Giggles is about to repost a few episodes, which will hopefully get a few more eyeballs on them. We finally are getting around to putting together a website: www.alexandericlivetogether.com. Alex keeps acting in the meantime: www.alexeharris.com. I keep on doing cinematography and directing: www.ericjlaplante.com.

ALEX: We will continue to shoot more episodes. We don’t believe in seasons, just ongoing episodes As long as we’re married, Alex and Eric Live Together will continue! We actually keep seeing Michael Shannon in our neighborhood and we’ve got a great guest role lined up for him. Michael, if you’re reading this….give us call?

Mentions: Watch every episode of Alex & Eric Live Together this minute!