Video Licks: Take a Bite Out of Skinny Bitch Jesus Meeting’s ‘Made to Order’ Pronto 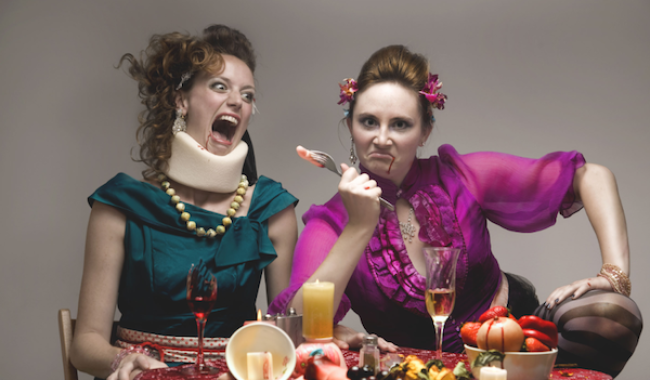 What’s better than take-out? A deliciously wicked web series that brings you the utterly shady side of the food delivery biz. The sketch team of Leah Rudick and Kate Hartman, AKA Skinny Bitch Jesus Meeting, brings you a series not only downright unique, but it makes us squirm in the best ways. In addition to the punk-foodie series, MADE TO ORDER, the all female duo has been taking over the NYC comedy circuit with their refreshing comedy stylings at places like the Upright Citizens Brigade, Caroline’s on Broadway, and the People’s Improv Theater. They’ve also been seen on the festival scene at Los Angeles Comedy Festival, Ladies Are Funny Festival, Women in Comedy Festival, FRIGID New York Festival, and Brooklyn Underground Comedy Festival. But enough about their other glorious achievements, it’s time to check out the first five episodes of Made to Order. I promise you’ll be craving more. (WARNING: It’s NSFW tasty)

“Made To Order” Episode 1: Business Women – Katie & Leah quickly embark on a food career. If only they could think of a catchy business name.

“Made To Order” Episode 2: Cous Cous – The eager entreprenuers learn about customer service and take desperate measures to get a winning critic rating.

“Made To Order” Episode 3: Gettin’ Cocky – It’s never a good thing when the health inspector drops by.

“Made To Order” Episode 4: Baby Food – The ladies have babies on the brain. David Lynch, watch out.

“Made To Order” Episode 5: Date Night – Katie and Leah branch out to cook a meal for a Brooklyn couple. Uh oh.