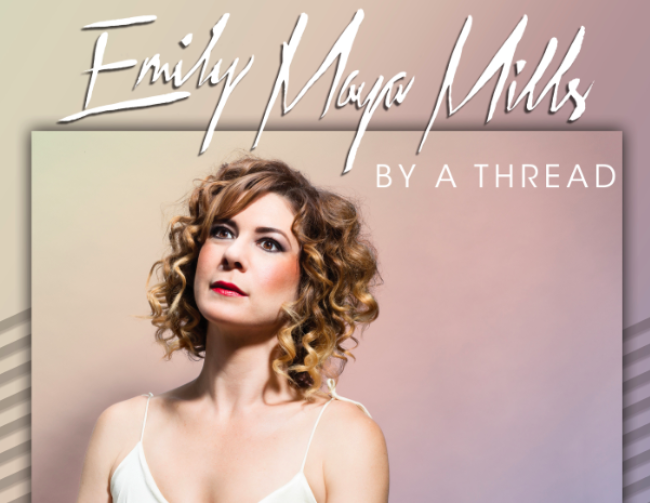 Comedian Emily Maya Mills makes stand-up look effortless. Her style has a deceptive genial quality that bites when you least expect it. Like a blow dart filled with wily truth bombs and simmering self-deprecation, you’re laughing at her jokes before you even realized what’s happened. There are comedians that make you laugh from your head or your heart, but Emily Maya Mills makes you laugh from your bones. She brings the feel good fire.

Getting her start in San Francisco, Emily Maya Mills is an LA mainstay performing on stages all around town, done a critically-acclaimed solo show (God Hates Figs), appeared in sketches with UCB (including their newly minted show on Seeso), and acted on TV shows like Key & Peele, Comedy Bang! Bang!, Orange Is The New Black, and Agents Of Shield. She’s also starring in the upcoming show PRICKZ for UCB. This week her debut comedy album, By A Thread, will be released on ASpecialThings Records. She took a moment to answer a few of my questions about its genesis, hosting shows in LA, and what By A Thread means. Take a look at our chat below: COMEDY CAKE: Congrats on the release of the album. I was lucky to attend the taping. How are you feeling now that it’s going to be heard by the world?

EMILY MAYA MILLS: Thank you! Feeling good! We did one taping, one take — it was a fun show, so it’ll be a nice snapshot (of a that weird kid who never learned to smile for pictures). I also like the record as case study in developing as a comic in LA. It’s a strange place to cut your teeth, for obvious reasons. Everything’s so high profile and stage time is hard to come by. You’re kind of learning to juggle naked, in front of circus employees. There are better ways to go about it, but I do like the freak I’ve become.

CAKE: As your debut record, how did you go about putting material together for it? Was it more about what’s on your mind now or a culmination of your stand-up thus far?

EMM: It’s a culmination I think. We recorded about a year ago so I’m not doing much off the album these days except for two bits that were new then and have developed since. But yeah, I reached back because I had some old faves that never really got to go to the dance, you know? In my first few years I’d burn through stuff. Like, I’d do 80% new material every time I got up because I respect improv so much and because I was young and dumb. I just recently started to enjoy the process of honing, repeating, chipping, and shaping — it’s what makes songs good and ready for radio or whatever. You know Kanye repeats the shit out of himself. What I’m saying is I’m Kanye.

CAKE: Hailing from San Francisco originally, do you still find that as a source of inspiration?

CAKE: What was it like working on The UCB Show for Seeso?

EMM: It was so fun! I think it’s the answer to a longtime gap in programming. Because it captured the rough and dirty live stuff UCB does so well, but with this highly produced slickness. It has the energy and the live audience but it has real attention to A/V, great direction, and way better wigs. I loved it. I hope the world eats it up. CAKE: You hosted shows like DIRT and DTF last year, any chance those shows will come back?

EMM: Ah, DIRT was amazing but kind of emotionally draining on account of all the brutal honesty. I think it’s a great fit for festivals, so who knows. DTF is no longer– I’ll never do another biweekly show, but we, the four hosts, Donny Divanian, Cory Loykasek, Erin Lennox, and our producer Laura Schwartz are starting a new monthly in Frogtown. It’s called The Frogtown Show! First show is May 7th with Kurt Braunholer, Nick Rutherford, Jade Catta-Preta, Kevin Camia and special guests. Come!

CAKE: What does ‘By A Thread’ mean?

EMM: Ha, it’s the lady I’m always going on auditions to play and the role I’m always cast in: Lady Holding on By a Thread. I’m a bit typecast and I can’t say I mind.

CAKE: What will you be doing to celebrate the day the album comes out?

EMM: We’re doing an album release at Josh & Josh on 5/5 (8:00 PM ~ Bar Lubitsch) and then that new Frogtown Show starts 5/7 (7:30 PM ~ The Left Bank). On the actual day, who knows? Climb up on a hot rock and meditate, melt the boundaries of time and perception to claim my throne as the one true lizard king? Maybe I’ll watch Lemonade? Not sure. Wanna hang out?

Mentions: Pre-order By A Thread now before it drops May 6th on ASpecialThing Records. Go to the album release show at Josh & Josh, May 5th at Bar Lubitsch (8pm). Follow Emily Maya Mills on Twitter and check out her website.