Quick Dish LA: Love Is in The Air for ALL MY SINGLE FRIENDS 2.15 at The Copper Still 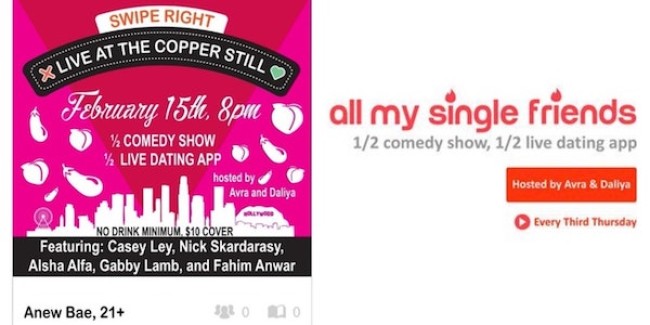 The most beloved and the most dreaded day of the year, Valentine’s Day is next week! If you are looking for some post V-Day entertainment, look no further than ALL MY SINGLE FRIENDS happening Thursday, February 15th at The Copper Still. The dating scene doesn’t have to be all about quickly swiping left on stranger selfies! At All My Single Friends attendees wear stickers that let fellow attendees know if they are “up for grabs” or “off the market.” Once the single status has been established, the comedy begins! You will see stand-up performances from LA’s best comedians. The Valentine’s day themed show will include this awesome lineup:

In between sets, comedians and hosts Avra Friedman and Daliya Karnofsky conduct onstage interviews with the bravest singles, as well as the comedians. At the end of the night, singles write down the numbers of the folks they’ve had an eye on, give them back to the hosts, and the ladies do the reaching out on their behalf. Yes, it’s that simple! A dating app IRL! Don’t be shy and come have a laugh!