Layers: TINDER LIVE! with Lane Moore Is Not Just A Show, It’s An Event 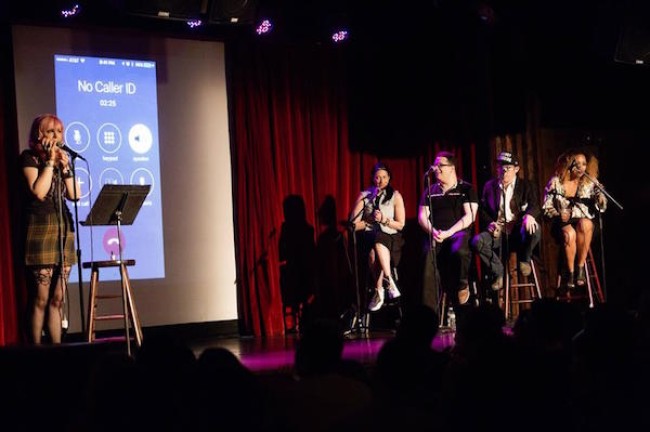 Winner Winner Chicken… Tinder? That sounds like an appealing description of myself. Now I’m ready. Look! I just got a message from… Feel? Is Feel even a person? The message is a GIF of a rat eating a salad, followed by an encompassing “same”. At this point I’m blushing. What should I say?

The only person qualified enough to give the most appropriate and cunning response is Lane Moore. You’ve definitely heard of her because she does, has done, will do, and is currently doing everything. She’s written for The Onion, she’s about to release her first book (HOW TO BE ALONE out Nov 2018), she’s in a band, she’s going to one day play catch with me, and she even hosts her own monthly, critically acclaimed comedy show Tinder Live! with Lane Moore.

Tinder Live! is special. Sure, many people like to mess with others on Tinder. But the big difference between those people and Lane Moore, is well, Lane Moore. She made a streamline Saturday night in with three friends and a floor tortilla into an EVENT. 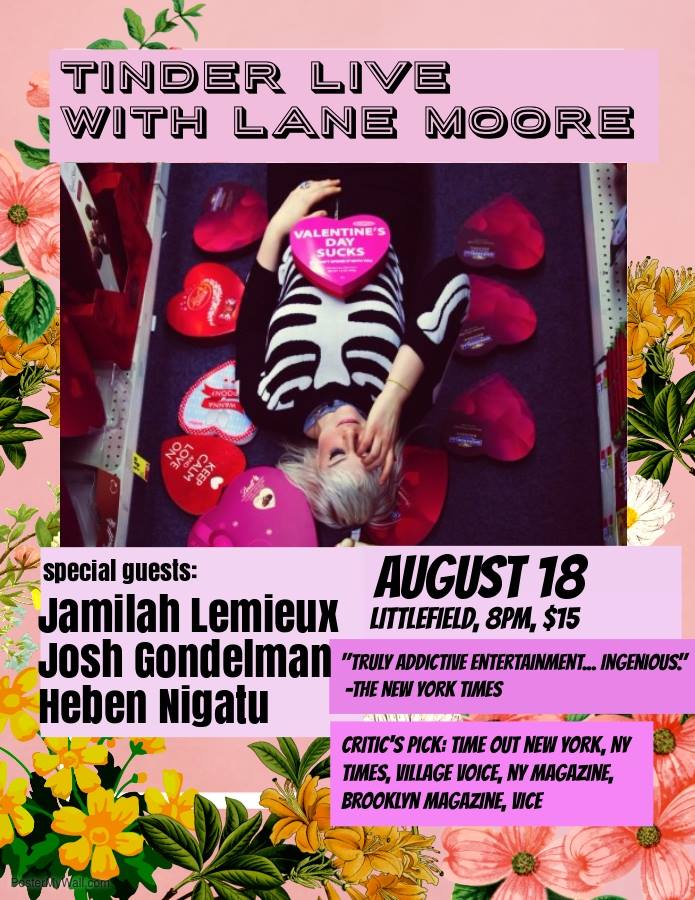 Moore isn’t making cheap digs at guy’s looks or ring collections. She isn’t going for the easy laugh. In fact, for Moore, the more macabre “Robs” she can meet the better. Before going live, Moore shows the audience some of her more recent matches. Like HAZ, a guy who loves boxers (dogs), hates when people write in all caps, or when they say “zzz” in a text. Moore knew just the thing to say that would satisfy both the audience and Haz, and wrote back “HI”, “SUP”, “ZZZZ”, followed by “also, I have boobs”.

Not all live events have to include a panel of experts, and Tinder Live! was no exception. For this July show, Moore picked the best panel of savants-in-something around: Mike Drucker (Full Frontal with Samantha Bee), Emmy Blotnick (Late Show w/ Stephen Colbert), and Scott Rogowsky (HQ Trivia). Not one person on the panel uses Tinder. Rogowsky uses a trivia app to meet his potential lovers. A guy who uses a trivia app to go on dates might sound odd, but is relatively normal compared to Saul the Tie: a tie who lives a 5-star lifestyle and hates clichés, and just like that the live portion begins.

At this point Tinder Live! transforms into Lane Moore’s one woman show. Every match was met with a new character from Moore. At one swipe, she is a Swedish woman who doesn’t know Swedish and says things like “xvsjvdkavjsvsbmioeq FUNtastic” to a Swedish man who does know Swedish. Another swipe she is a dirty school whose “school needs cleaning”. The Moore jocular reflex was in full effect. Her words and responses were funny; but because she made them funny.

The best match of the night was Tommy, a DJ who messaged Moore back IMMEDIATELY. He asked her if she was busy and she almost invited him to the show. A live meeting at Tinder Live!? It didn’t end up happening, but one of these shows it will. Because Moore will go the extra mile for this show, and she isn’t afraid to push the bounds of what the show entails. Tinder Live! isn’t a standard comedy show, this is a Lane Moore comedy show: she’s going to do what she wants and you’re just going to have to laugh. If a Botox injected bagel with lox DJ, Tommy, finds her funny, anyone will.