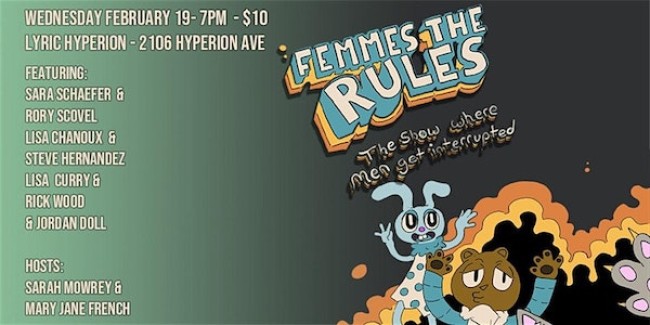 It’s almost time for the interrupting to begin. Next week, on the day of February 19th, Femmes The Rules is back in action. Come see your favorite male comics get interrupted by your equally favorite female (or non-binary) comics in a feel good show full of comedy jabs. Each show starts off with some comedy pairings and then the real fun begins. During the male comedian’s set, the female comedian he’s paired with can interrupt him with commentary, riffs, and arbitrary strikes. When the man’s set is complete, it’s time for the woman to do her set, while there’s not a peep to be heard from the other side. You have to see it to believe it! This month’s pairings will include:

Hosted by “a pair who bonded over their love of interrupting men,” Sarah Mowrey (The Drop Comedy Club) and Mary Jane French (Thrillist)