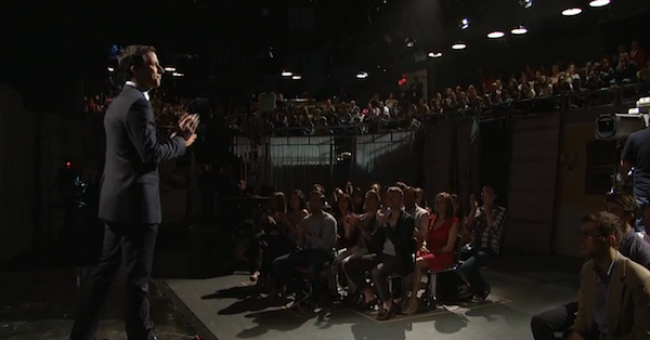 Veteran cast member Andy Samberg returned to host Saturday Night Live this past weekend along with a bevy of familiar faces including Kristen Wiig, Maya Rudolph, Bill Hader, Fred Armisen, Martin Short, Seth Meyers, Paul Rudd, Tatiana Maslany, Pharrell Williams and 2 Chainz. There was a mix of both topical sketches, those of SNL past and just plain out there ones. We picked out the crowd-pleasers and have pasted them here just for your eyeballs’ delight. Enjoy!

The “Digital Short” When Will the Bass Stop spotlighted the DJ scene and took it to a whole other horrific level.

Your favorite SNL cast members reunited for a Kissing Family sketch that was almost unbearable to watch (in a good way).

Weekend Update’s Get in the Cage with Nick Cage (Andy Samberg) and Paul Rudd garnered much adoration as two thespians discussing their craft.

Our final pick of the evening was the Bvlgari advert brought to you by our favorite vacuous merchandise-touting ex-pr0n stars.

Mentions: We can’t wait for the 40th season of SNL on NBC!