Video Licks: ROB POLONSKY Gets Re-Bar Mitzvahed In A New Episode of “Call It A Show” 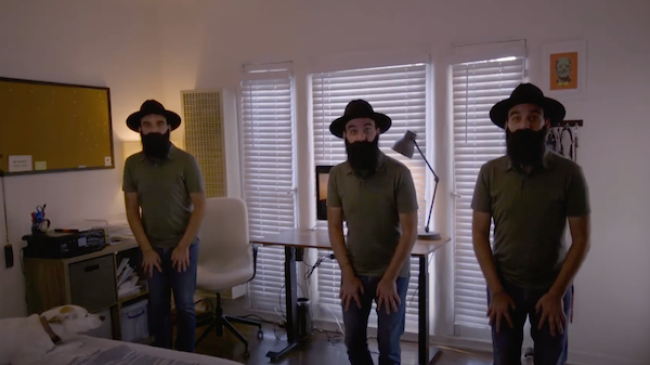 If some people renew their wedding vows, isn’t it then totally logical that actor/writer/producer Rob Polonsky should attempt to get Re-Bar Mitzvahed? In the latest episode of Rob’s Call It A Show series, we find our friend on a quest to find out just how he can go about reconnecting with his Jewish roots. He starts off getting advice from his dentist (Dr. Dovi Prero) who recommends Rob re-engage with the tradition and learning he once experienced coming of age in the Jewish community. From there, Rob gets in contact with spiritual leader and founder of Venice The Rose House, Rabbi Peretz, who details what’s involved with this renewed ownership of good deeds and re-energizing of familiar roots. Does this mean a PARTY? No yet!

Rob is soon off to do a mitzvah which means he’s about to do something good for his friends that reconnects him with his faith. So what does that entail? Looks like Rob is going SHOPPING for a mezuzah. The manager of Atara’s Judaica explains the significance of the contents of the decorative case (a super cool one, in this case) that’s affixed to the doorpost of homes/rooms to fulfill a holy commandment. Of course, one mitvah isn’t enough. Rob then makes his famous Matzah ball soup for a Shabbat gathering & service with his friends. Upon completion of his mitvahs, he’s back at The Rose House for the completion of his Re-Bar Mitvah ceremonies. Finally, the Zoom PARTY can begin! Enjoy some sweet, lighthearted storytelling while you pick up some Canter’s deli soup! (Yes, I know, LA is having a heatwave).

In every episode of Call It A Show, Rob’s ADHD drives him to pursue new and exciting endeavors where he can let his mind wander and dive into new worlds filled with interesting people and businesses. Success and failures are always options along the laugh-inducing way!