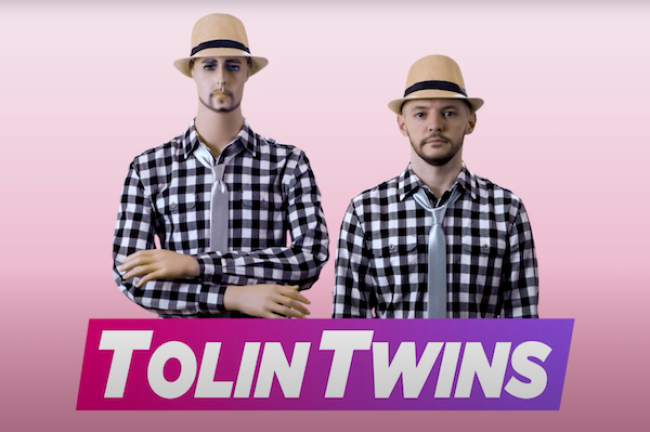 On this very day in 1991 a certain Twin Peaks‘ character uttered the haunting words “How’s Annie?” Our lives were forever changed. Today I bring you Austin Tolin’s (Detective Calzone) TOLIN TWINS, a two-word titled serialized series that examines even stranger happenings. They may have been apart, but now they are together, which, at the surface, seems all well and good. However, it looks like their lives are about to get turned upside down in the most unexpected ways. “Beyond Life and Death” exist the Tolin Twins. Enjoy! (Keep in mind, Tolin’s use of news and talk show footage may be the best ever witnessed, on the planet!)

Tolin Twins Episode 1: Long-lost identical twins separated at birth coincidentally meet at the mall. The rest is all cotton candy and lava lamps.

Tolin Twins Episode 2: The rifts among brothers begins. First it’s cotton candy, then it’s a high speed pursuit. What will ever become of those swanky fedoras?

Tolin Twins Episode 3: Orange jumpsuits, orange fedoras, and a prison break. Will a week-long manhunt keep Austin and Devin down?

Tolin Twins Episode 4: Jaws will drop when the truth is revealed at the trial of the century. Get out the cash cannon!

Tolin Twins Episode 5: Its light. Its fluffy. It’s pink. It’s a dream come true for some wrongly accused twins. Will a lava lamp destroy an empire?

Tolin Twins Episode 6: Better buckle in, this ride’s going supersonic. And you thought evil only belonged to BOB! A penny for your quad thoughts.