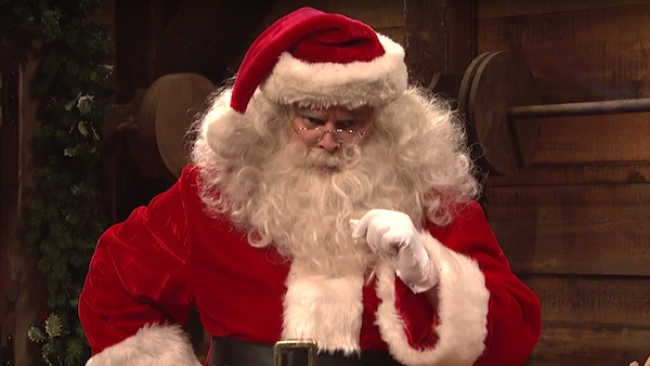 This weekend not only were we treated to Ryan Gosling hosting Saturday Night Live, but the show was, hands down, the best of the season to date. From the host and cast losing composure during an alien encounter sketch to a spot-on parody of that Nepresso ad with Clooney and DeVito, the episode was a true crowd-pleaser. The two most festive sketches of the evening had to be those titled Santa Baby and Santa. In the first sketch Gosling and Vanessa Bayer play a couple who’s belief in the jolly old Saint Nick gets more than uncomfortable. (WARNING: These two sketches may not be getting presents under the tree this year)

The second holiday sketch offered up those adorable Santa smitten elves we’ve seen in sketches past. Will those elves (Kenan Thompson, Vanessa Bayer, Ryan Gosling) ever make the to toys they’ve been asked to create by Santa (Bobby Moynihan) or will they be properly punished? Find out!