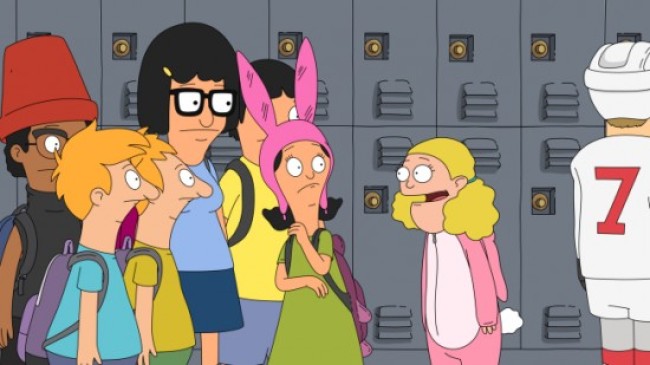 FOX‘s ADHD lineup continues to leave me wholly satiated and Bob’s Burgers tops my list of all time favorite animated shows. I think many would agree with me that candy is a very important aspect of a child’s life growing up. I mean just think about all those candy-centric holidays…Christmas, Easter, V-day, and the mother of all of all holidays, HALLOWEEN. “Bob’s Burgers” celebrated the quest for sweet treasures this past Sunday with their Halloween special “Fort Night”.

The Belcher children inform Darryl (Aziz Ansari) that they plan to parade about town as a Chinese dragon with their pals Ollie and Andy Pesto (Sarah & Laura Silverman). The kids have, of course, convinced their parents, Bob (Jon Benjamin) and Linda (Jon Roberts), to “help” with the construction of their costume. We soon learn that Darryl has Halloween down to a science when they pick up the finishing touches of dragon costume at their multi-level fort. Darryl pulls out his “Treasure Trail” map which he has compiled through painstainking effort: “It took phone polling, mailing lists, and a blog I follow called Candy Randy.” The must-visits have been segregated from the most avoids. It’s a candy lover’s dream. Tina’s (Dan Mintz) final Halloween haul could be an epic one for sure with this information.

Only, there is one pink nightmare of a problem named Millie Frock (Molly Shannon) hindering their candy quest. Millie wants Louise (Kristen Schaal) to be the dust to her bunny for Halloween and Louise is just not having it. Millie follows the gang to their fort but is quickly told to come back later. In the meantime, a truck backs up against the fort and blocks the kids from leaving for their Halloween escapade. Millie returns to find the gang boxed in and the kids ask her to go for help BUT Louise cracks when Millie stalls fawning over her pink rabbit-eared pal. Louise shouts “Go get some help you, you frickin nut case, you creamy sucker … Can you not understand a hint? GO GET HELP.” Now comprehending that Louise does not like her, Millie wreaks revenge by thwarting the kids’ efforts to escape from their boxy predicament. There is a hilarious scene where Millie drops spiders into the fort and Andy is separated from the group as they seal off the spider free room. The twins address each other fondly thru a partition:

Ollie: I’ll never forget you, Andy.
Andy: I’ll be with you every time you look in the mirror.
Ollie: What?
Andy: Because we look alike. Nevermind.
Ollie: Oooooh, I get it now.
Andy: I didn’t want these to be my last words.
Ollie: WHYYYYYYY!?

Louise discovers the spiders are not real.

Meanwhile Linda sends Bob on an errand to the art supply store to collect extra sequins for the dragon costume. Unfortunately, the store is about to close and Bob has an altercation with mom and pop art store. Bob drops the sequins all over the street when he runs out of the store after being called “Bob Fosse”. The kids find an escape path but soon discover Millie is on to their plan and Louise concludes “a rat” is responsible for leaking their plans. She grills the gang and weeds out the rat, Darryl. And so commences the “Burp and Blow” torture of poor pantless Darryl. However, its the one day Ollie and Andy do not eat peanut butter and tuna fish.

Millie continues her despicable revenge by telling Linda and Bob that the Belcher kids went trick or treating when they get too close to the fort. Millie volunteers to show the Belcher parents where the kids might be located. Bob and Linda lose sight of Millie and use the dragon costume to trick or treat for themselves. Darryl figures out a way to move the truck lift off the fort but instead pushes the wrong button lowering the lift to crush the gang forever. Luckily, the kids stack the strong garbage. The kids quickly crawl out just in time to see their fort collapsed. They are relieved but soon find trick or treating time has ended. Gene (Eugene Mirman), Louise, and Tiny return home in sadness only to discover Mom and Dad have candy loot of their own which the kids heartily munch on.

Millie returns to the fort with her huge bag of candy ready to taunt the gang but finds only a heap of garbage and a pair of the twins’ shoes. She exclaims “OH my God I killed them! OMG OMG OMG People are going to be so mad at me. I’m going to have to find a therapist. Oh geez, I hope I like my therapist.” To her shock she hears the voices of the “deceased” children reply “You definitely won’t.” The ghost children tell Millie to give her their candy and she runs off. We are then treated to the Candy Randy song (which I now must play on a loop). “Bob’s Burgers” Forever!