Layers: “The Bitch Seat” is A Show-And-Tell Feast For The Soul 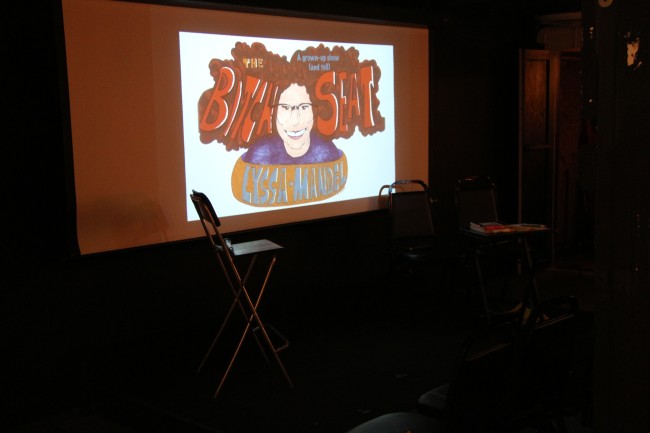 When I first received an invite to see a show called The Bitch Seat I must confess I was ever so slightly intimidated by the name. Sure I knew it was a comedy show featuring comedians presenting items from their adolescent past on stage. I was even aware it was taking place within the nurturing confines of the NerdMelt Showroom. All that didn’t matter, I was still convinced I would somehow be barraged by tormented comedians hellbent on on making sure I loathed their past more then they did. I swept those notions under my subconscious rug and decided to “keep calm, and carry on.” My first signal that everything would be alright was the presence of teeny-tiny noise makers on every attendee’s chair. Nothing that adorable could turn against me, right? The night quickly shifted in my favor when the creator and host of the show arrived on stage. Lyssa Mandel, adorned in cheerful attire, was instantly my new BFF. She expressed her genuine excitement to be bringing the show to LA again and assured the audience a good time was soon to be had. 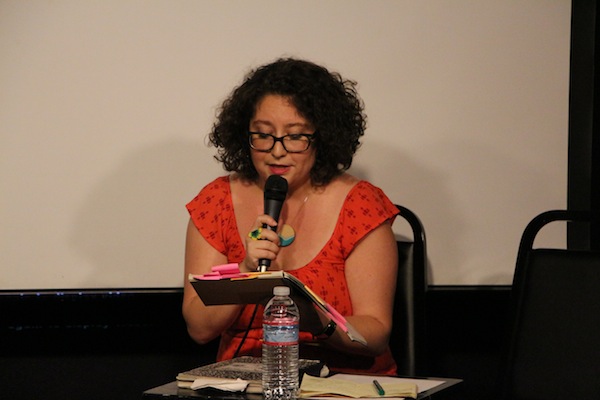 A little light reading with The Bitch Seat host 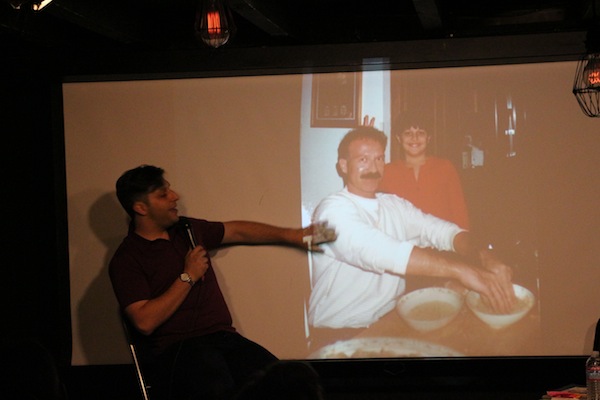 Lyssa and her co-host Philip Casale started off the evening sharing some adorable photos and anecdotes about their past. Lyssa confessed she was not one to break the rules as a kid and her present day boyfriend Casale appeared to be the perfect match for her in this respect. With hosting chemistry in check, the show was off to a swimming start. The first guest/victim of the evening was Megan Rosati, creator of the amazing web series 52 Ways to Break Up. After a reading from Rosati’s elementary school masterpiece Me, The Seagull it was clear the talented girl was destined for artistic greatness. At a tender age Rosati was already ripe with creativity using the character of an ocean bird to express her thoughts in the most delightful and unintentially funny way. I don’t think I was ever THAT profound. 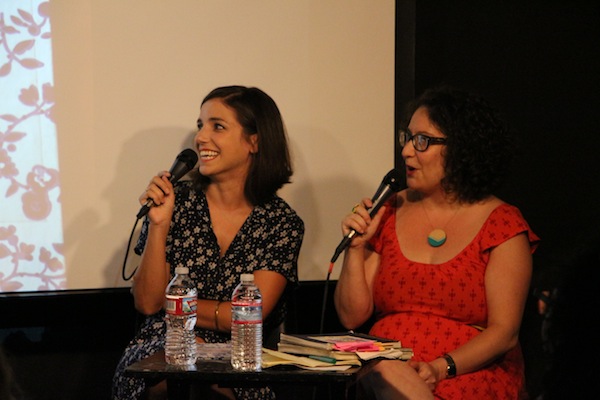 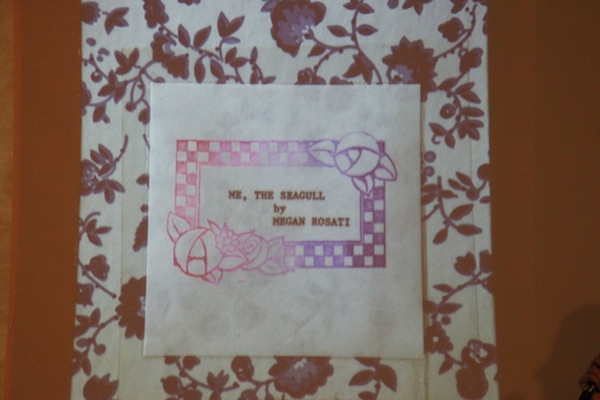 Comedian Barbara Gray, co-host of the hugely popular podcast Lady to Lady continued the overshare party with a decidedly more hormone-fueled presentation. Gray read the audience a list of comedians and celebs she deemed worthy of notation as a teen. It was impossible to restrain oneself from laughing out loud at the exceedingly organized nature of the list and it’s contents. I won’t say Gray’s choices were unachievable, but it might take some utterly impossible sexual orientation changes to make those dreams a reality. Love it! 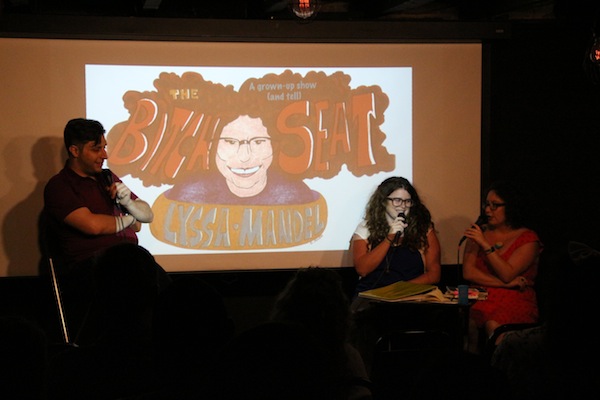 The therapy session was in full swing at this point. SASQUATCH Sketch member, Danny Jolles, was up to bat next. The last minute participant practically stole the show with his honest and ultimately hilarious portrayal of a kid overshadowed by his impressive lineage. Even with the a war hero grandfather and coach/marathoner dad as guides Jolles found it difficult navigating through childhood. Luckily, his unrelenting positivity pulled him through aided by some DIY branding. Jolles showed off a poster he’d created (that survived a house fire) proving his worthiness as a friend. I really can’t express to you how inspirational Jolles’ stories were, but I’d book him as your next motivational speaker/comedic pinch-hitter. The awww-factor was off the charts! You may notice Danny holding up a shiny token in the photo. The host awarded every guest one of those pogs from the 90s from her personal collection. Talk about getting nostalgic! 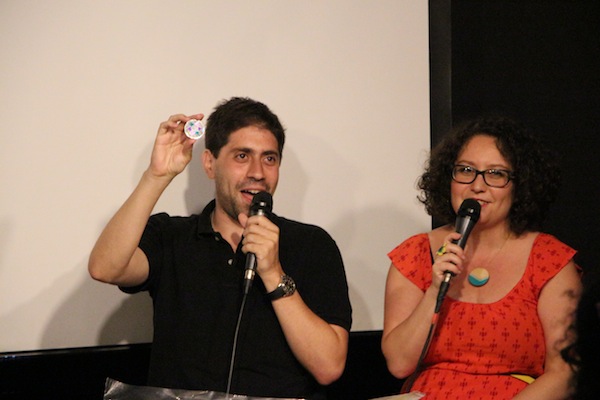 Danny Jolles is awarded a most coveted pog

The Bitch Seat headliner of the evening was no other than Emily Heller, seen on Conan and creator of the Above Average series The Future. To say this evening ended with a bang is an understatement. The highlight of Heller’s session was a letter she’d written to the former POTUS, Bill Clinton. Emily’s letter was brimming with a burgeoning feminist viewpoint and her written voice was loud. Sadly, her letter was never personally addressed. However, the prolific letter writer would be awarded by a different mentor in her adulthood. Heller had written a letter to THE Weird Al requesting a photo of the entertainer. By sheer kizmet (and familial connections) Heller finally received that signed photo she’d asked for all those years ago. It just goes to you show you that sometimes your heroes pull through in the end. 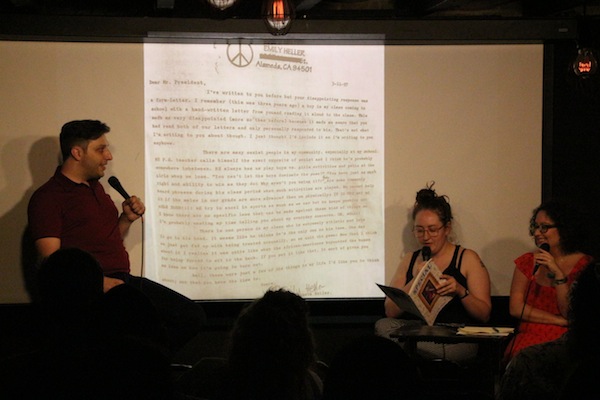 Emily Heller’s letter to the President

Would I see this show again? Hells to the yes. Will I have any trepidation the next time around? What do you think? Please see The Bitch Seat whether it’s in New York or LA. It’s well worth the price of admission.